EU politics: FUD of the day 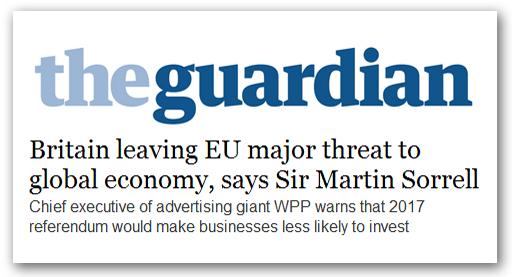 In what is going to be a one-sided and thoroughly dishonest debate in the legacy media, the weapon of choice will be the europhiles' favourite – Fear, Uncertainty, Doubt (FUD).

They don't engage. They don't address arguments. 'They don't answer criticism. They don't correct their errors. They lie, they cheat, and they resort to fear – because they have nothing else to offer.

And scare tactics work They rely on shock value and novelty, alongside the handmaiden of uncertainty, all to create doubt. And doubt serves the status quo effect, pushing people to hold onto nurse for fear of something worse.

But fear is a short-lived effect. Technically, it induces habituation. People get used to it, inured to the shock. In simple terms, it wears off. Once the weapon has been deployed, it is a diminishing asset. More and stronger doses are required to achieve the same effect, until the scare no longer works at all.

Thus, the answer to Euro-FUD is not always to address the substance. Most often, there isn't any. The tactic plays at a visceral level – it is not appealing to the rational. Thus, it must be handled in a different way. Exposure, repetition and ridicule are the best antidotes.

So, today the first structured fightback on this blog: "FUD of the day". I'm minded to collect the best example each day, and give it the prominence it deserves. We can possibly go to "FUD of the week" and even think of an annual award, for the best example of the tactic - "Euro-FUD of the year".  We might even nominate the best FUD-factory. The BBC is vying with the loss-making Grauniad for the lead spot at the moment.

The volume at the moment looks daunting, but the good news is that the europhiles are peaking too early. At this rate, they will exhaust their stock and it will cease to have any effect. Thus we offer you three examples of the genre, one from the loss-making Guardian, one from a trade magazine and the other from Handelsplatt.

Send in your examples and I'll put the best ones up tomorrow. You have nothing to lose but your FUD, or – as the song went - FUD, FUD, glorious FUD.