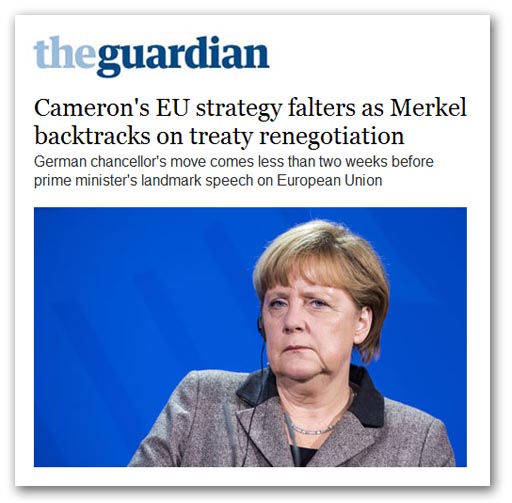 The Guardian is claiming that "David Cameron's entire European strategy has been thrown into doubt" by Angela Merkel who has abandoned plans to call for a major revision of EU treaties.

Cameron's current strategy (or so we are told), is to wait for the expected IGC, when the "colleagues" planning to go for a treaty revision, and then hijack it with demands to allow repatriation of powers to the UK. The theory was that the threat of a veto would force the issue and give Cameron what he wanted.

However, it is now "understood" that Merkel has given up on the idea of a major treaty revision for the moment, having decided that it is fruitless to push for a treaty revision in the face of strong opposition from France and elsewhere. That would leave Cameron with nowhere to go.

If this is the case, though, there is nothing new. We have already reported that Merkel was not going to push for any treaty revision before her general election later this year, and a timetable for action has already been flagged up by Barroso, which delays an IGC and puts back a referendum to 2017 or 2018.

What we are seeing, therefore, is The Guardian beginning to catch up with the idea that there cannot be an IGC in the immediate future. A delay of four to five years is, in political terms, sometime never. It is certainly not a bankable commitment that Cameron can put in front of the nation and expect a positive response.

And adding to the sense of disarray is Georg Boomgaarden, the German ambassador to London. He is said to have rejected the idea that Britain demand a "pick-and-choose" treaty revision, again a threat of leaving. The ambassador is reported to have said, "This is really a choice between out and out … If you pick and choose you blow up the single market".

Then we get Austrian Chancellor Werner Faymann launching a broadside at Cameron, accusing him of sending mixed messages when it comes to the EU. What he said depended on whether he was addressing the British people or a meeting in Brussels, Faymann told Saturday's edition of Austria's daily newspaper Standard.

This is certainly stacking up against Cameron. It never was the case that renegotiation was a realistic option, although the prime minister and his supporters have clung to the idea that they could "handbag" their way through Brussels, and make enough of a show to convince the nation that concessions had been achieved.

With the weakness in that strategy now exposed, Douglas Alexander, the shadow foreign secretary, is piling on the agony. He says that Cameron is risking pushing Britain towards exit from Europe, as he is not in control of the agenda.

However, it remains the view in Whitehall that eurozone governance arrangements will need "greater democratic accountability" underpinned in another EU treaty, so there will eventually have to be an IGC. "Europe is dealing with an existential crisis," one British source is cited as saying. But while that may be correct, the key word here is "eventually". There is no expectation that an IGC will be some time soon.

In the meantime, the europhiles are out in force, ramping up the scare, in an attempt to dissuade Cameron from taking Britain to the exit. The latest is an apparent piece of corporate blackmail, with Dave Hodgetts, Honda's job-shedding UK managing director, calling for Britain to stay "close to the heart of Europe".

Hodgetts warns that the UK risks losing out if a subsequent referendum voted for the UK to leave. "It depends on what's negotiated. There would have to be a some penalty to being outside rather than inside that’s the risk I think", he says, although he does concede that Honda would accept a changed relationship between the UK and the EU if it didn't affect the competitiveness of UK manufacturers.

With ten days to go before Cameron gives his speech, we can expect to see much more of this, as the europhiles make a last-ditch effort to block anything that might edge the UK towards the exit. The are even resurrecting the old warhorse Heseltine, dragging him out of the mortuary to tell us that an "ill-advised" referendum would jeopardise the UK's business prospects.

"To commit to a referendum about a negotiation that hasn't begun, on a timescale you cannot predict, on an outcome that's unknown, where Britain's appeal as an inward investment market would be the centre of the debate, seems to me like an unnecessary gamble," he adds.

But, with the renegotiation option seeming less and less credible, all the naysayers are doing is closing down the options. A renegotiation "sometime never" is not going to satisfy the eurosceptics, leaving the prime minister with almost no room for manoeuvre. What the europhiles do not seem to realise is that doing nothing is not an option either.

Cameron must be looking for an exit plan of his own, but all we can hear is the sound of doors slamming. The sins of the past are catching up with him.