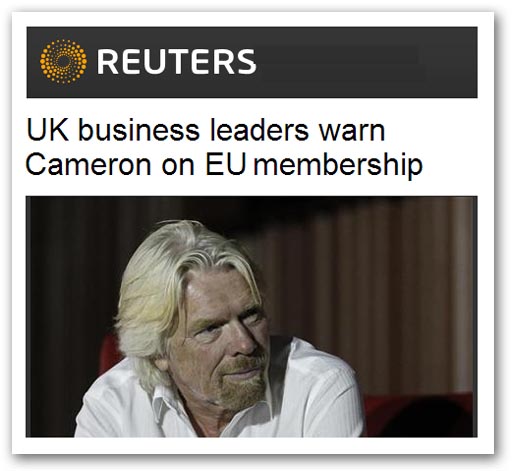 Here we go again, with the predictable tactics. Get a bunch a corporates fronted by a "personality" to wham off a letter to the Financial Times telling how the world will come skidding to an end if we leave the EU. Then sit back and wait for the news agencies to pick it up and then, before you know it, all the patsies in the legacy media will have splattered it over their pages.

The poster boy in this case is ex-thief Richard Branson, the 62-year-old whom the europhiles have chosen to lead their youth-focused EU referendum campaign, all centred around a rebranded group called the Centre for British Influence Through Europe.

Presumably, they are spurred on by Charles Grant of the Centre for European Reform, who rather glumly observes that: "Unless politicians, business leaders and trade unionists find the courage to make the case for membership, it is only a matter of time until Britain leaves the EU".

Laughably, though, it seems the europhile idea of how to "make the case for membership" is to come up with blood-curdling scare stories about the risks of leaving. Even poor little Jon Worth is struggling to find a sensible rationale behind the campaign. His idea of keeping his readers informed, however, is to run a story we did nearly four months ago.

In a way, it is quite comforting to see the europhiles is as much disarray as the eurosceptics, with the European Movement currently accusing Mr Cameron of lacking "diplomatic common sense", lecturing "in a patronising fashion" and managing "to alienate and baffle in equal measure his European partners".

Their scenario is that the Prime Minister will return empty-handed from his attempts to "repatriate" powers and change the UK’s terms of EU membership. Even if other members states feel sorry for him and give him some token powers back, this will never be enough to satisfy all those "Europhobes" in his party, UKIP and the tabloid press who he has been trying to appease with fantastical notions of "power repatriation".

They then fear that Cameron will have to put to a vote that failed outcome and be forced to campaign against EU membership, ending up in us leaving the EU.

Remarkably (or not), the European Movement's idea of a winning strategy is very similar to Open Europe's grand plan. Cameron should "be joining other EU leaders in their efforts to improve the way the EU functions, deepening and widening the Single Market and improving those EU policies that need amending". They want "constructive engagement, building alliances, providing a vision for the EU and participating in efforts to make that vision a reality".

Instead, poor things, they have ex-thief Richard Branson and bunch of unknowns such as Roland Rudd, chairman of the Business for New Europe campaign group, and Roger Carr, CBI president, all whingeing about the perils of leaving the EU.

For once, one can feel a little hopeful. Even if the eurosceptics do not seem to have the wherewithal to win the campaign, they at least have the europhiles working for them, doing their best to lose it.