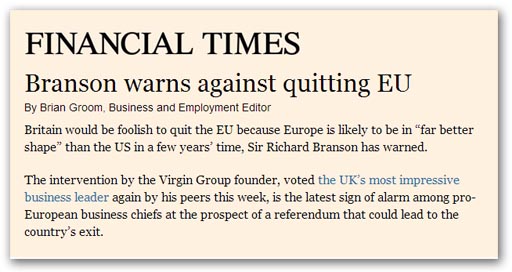 Getting so far down into the barrel that they are not so much scraping the bottom, as breaking through to the floor beneath, the Financial Times dredges up Richard Branson, for their latest scare on how terrible it would be to leave the EU.
In a way, it is rather appropriate to recruit a man who built his fortune on VAT fraud , this being an EU-originated tax. Branson, by this means, provides living proof of how the EU (or the EEC in his case) helps businesses get established.

And, although governments prefer to keep quiet about this "benefit" of the EU, many other businesses have enjoyed a kick-start through ripping off the taxpayer, although not all have been as lucky as Branson.

Anyhow, this ex-thief, one-time beneficiary of the "project", convinced warmist and serial loser, with a record for dishonesty, now tells us that Britain would be "foolish to quit the EU". This is because, in his opinion, "Europe" is likely to be in "far better shape" than the US in a few years’ time.

With that quote safely in the bag, the FT then tells us that this intervention by the Virgin Group founder is "the latest sign of alarm among pro-European business chiefs at the prospect of a referendum that could lead to the country's exit".

Put a different way though, "pro-EU business owner is against leaving EU", doesn't exactly have the same cachet. Nor is ex-thief Richard Branson really in a position to determine whether "an exit would be very bad for British business and the economy as a whole", as he avers.

Not least, whether business would be adversely affected would depend on the settlement reached with the EU and, if the EEA "Norwegian" option was adopted, Richard and his fellow corporates would be entirely unaffected by a UK withdrawal.

However, Branson seems to think that, because the EU was the UK's biggest trading partner, we must stay in and help rebuild it. Unless it did this, he says – demonstrating a limited grasp of logic - "Britain could be an island completely adrift in 20 years".

Just to get this right, it seems the man would have us stay in to save the EU, but if we don't, one presumes the EU collapses, and we end up being cast adrift?

Then, this is the man who in the year 2000 urged the government to start campaigning for the single currency, warning that jobs would be lost and interest rates would be higher without signing up. "We cannot be members of the single market without being part of the single currency, the euro. We must fight the xenophobia that surrounds so much of the debate", he said.
At least the FT has the grace to admit that big business is "strongly pro-European" (meaning, of course, pro-EU, but they're a bit thick), but that self-same "big business" has been reluctant to get into the referendum debate, in part because public trust in corporate Britain is low and credibility was lost in past campaigns in favour of euro membership.

But concern has grown about backbench pressure on David Cameron to promise an in-out referendum, and now the group that so wanted to be in the euro is telling us how important it is to stay in the EU.

One would think that, with his flair for marketing, Branson could then come up with something new or interesting to say about the EU, but we get the same leaden prose that we get from all the rest.

"The UK must not become a peripheral country on the edge of Europe", he says. "This will be damaging to long-term prospects of British business and also in the country’s ability to attract new international companies to set up and employ people in the country", he says.

"We need to be constructive. Britain needs to get together with Germany to restructure Europe", he says. "We are in a position where, if we take a positive approach, Germany and ourselves could be the key two countries to the restructure of Europe".

Boring, boring, boring. It will be worth leaving just so that we don't have any longer ex-thieves pontificating about the EU.