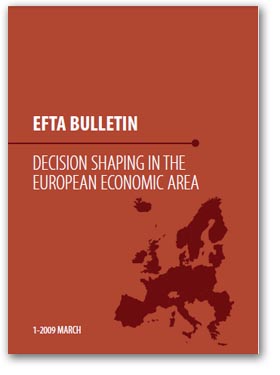 Following on from the earlier piece where Norwegian Foreign Minister Espen Eide tells us that membership of the EEA is "regulation without representation", further evidence comes via a reader of the full extent of this lying propaganda in the form of the EFTA website.
This is, of course, the organisation to which Norway belongs and through which it becomes a member of the EEA and thus participates in the Single Market (or "internal market" as they prefer to call it). And, on the page to which we link, we see reference to "EEA EFTA Comments", followed by this text:

One of the ways in which the EEA EFTA States participate in shaping EC legislation, i.e. when the Commission is drawing up legislative proposals, is by submitting comments on important policy issues. The comments are elaborated by working groups, cleared by the relevant subcommittees, endorsed by the Standing Committee and officially noted by the Joint Committee after they have been sent to the relevant services in the Commission and the European Parliament.

Many examples of the pre-legislative consultation process are given, for instance here, on roadworthiness tests. And considering that the issues there are also subject to UNECE agreement, to which Norway was a party, that means that there has been a pretty hefty level of discussion.

In case anyone is in any doubt as to the degree of consultation and negotiation between EFTA and the EU, the free trade organisation helpfully produced a 44-page pamphlet on Decision Shaping, back in 2009 – a mere three years ago. And in the introduction, EFTA secretary-general Kĺre Bryn states that the EEA EFTA States participation "directly in the continuous development of the EU Internal Market is an essential, and unique, feature of the EEA Agreement".

Within the document, page 13 and following pages are particularly interesting, as they set out in detail the EEA involvement in the decision-making process, complete with a helpful diagram (below), which sets out some of the processes. A clue as to what it is about comes with the heading: "EEA EFTA participation in the preparation of new EU law".

The crucial thing here is that Norwegian Foreign Minister Espen Eide cannot possibly be unaware of the nature and extent of these consultations and the processes involved. The ministry which he heads is closely involved in all stages, including the participation in eleven EU agencies.

Thus, what Eide says about Norway having have "no role in negotiations... no impact, no influence" not only cannot be true – he must know that it is not true. It is lying propaganda. And that is all that is left to the euophiles. They know that the truth destroys their arguments, and they must therefore resort to a fabric of lies.

How interesting it is that the BBC is so keen to promote these lies on their behalf. But then, this is exactly what we must expect from the state broadcasting organ - and there will be more of it when a referendum campaign materialises.