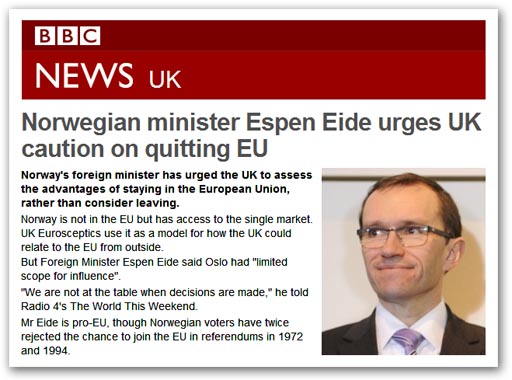 You can tell how potentially damaging Norway's status is to the europhile cause by the amount of attention being paid to it. If it wasn't quite so dangerous, they wouldn't all be harping on about it, from Business for New Europe, to Barroso, Open Europe, Sir Stephen Wall, Cameron and The Observer.

And now, the very latest in this long line of naysayers is no less than Norwegian Foreign Minister Espen Eide, who is urging the UK to assess the advantages of staying in the European Union, rather than consider leaving.

Although, as we know, Norway is not in the EU but has "access" to the single market, Eide says Oslo has "limited scope for influence", telling BBC Radio 4's The World This Weekend that, "We are not at the table when decisions are made".

The only thing we need to know about Mr Eide, though, is that he is pro-EU, one of the political élite who has never come to terms with Norwegian voters having twice rejected entry to the EU.

Just to amplify the scare tactic, the BBC also recruits Sir Nigel Sheinwald, former UK ambassador to the US and to the European Union. He obligingly trots out the propaganda, telling us: "The issue is - do you want to be part of the single market? All the economic indicators are that the UK needs to be". Then we get to the punchline:

But [the Norwegians] have no role in negotiations... they have no impact, no influence and there's no accountability. So this is regulation without representation. It's the first thing the UK needs to decide, whether it wants to be associated with the single market, from the inside or the outside. If on the outside, both the Swiss and the Norwegian models give you no actual impact on the substance of what's agreed.

Nowhere, of course, is the bigger picture rehearsed – no mention of the EEA Council, the working groups, nor any of the work of UNECE nor of the multiplicity of international organisations at which we have seats. This is bias by omission.

Instead, the BBC calls in aid Myrtle. He tells us he was "not aware of any British Eurosceptics who are arguing that we should precisely replicate the Norwegian model". He adds: "What we're after is something a bit more like what the Swiss have, but actually I think we could get better terms than either Norway or Switzerland".

Needless to say, Myrtle does not represent eurosceptics, British or otherwise, but he serves the BBC propaganda well, seeking to put the nail in the coffin in the most realistic option for a quick withdrawal from the EU. At least, though, we can take comfort from the idea that, with so much opposition, we really must be on the right track.