Germany: the EU is the problem 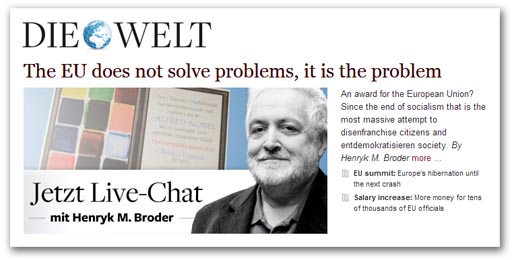 His name may not mean much to us but, born into a Polish Jewish family from parents who survived Nazi concentration camps, Henryk M. Broder, now a naturalised German, journalist and author, is a powerful and respected figure in the German media.

For him then to rip the EU apart is quite significant. We are witnessing, he says, the last days of Europe. Not in the physical, rather the philosophical and metaphorical sense. Just as Karl Kraus in 1922, published his monumental work, "The Last Days of Mankind", the "The Last Days of Europe" lie immediately ahead.

His piece, though, starts with a Russian proverb: there is no such thing as an ugly bride – just a shortage of vodka. From that one infers that you have to be drunk to see merit in the EU. But vodka or not, "lousy remains lousy".

Broder thinks the Nobel Peace Prize award is a "silly idea", not dissimilar to the Central Committee of the Communist Party of the Soviet Union giving itself awards for having made an extremely important contribution to peace and security in Europe and in the world.

As someone who spent the first years of his life in Poland, he adds, I have a slight allergy to the word "peace": "not because I'm for the war, but because 'peace' is the general alibi with which any barbarism can be justified. The Berlin Wall was for us peacemaking or peacekeeping, but in any case inevitable". Today, one would say there had been no alternative.

The EU, Broder says, is the most powerful attempt since the end of Socialism to disenfranchise citizens and undemocratise society. The EU does not solve problems, it is the problem.

We are told again and again that there is no alternative to the EU, since the breakup of the Union would not only mean the end of prosperity, but also the revival of long outmoded conflicts. Put into practice this means that we are asked to trust unconditionally those who drove the cart to the wall and now expect them to repair it.

If a doctor removed an appendix instead of tonsils, would we give him a second chance, Broder asks, answering his own question in the negative. But when it comes to Europe, we do it because we just have no choice. There is no alternative. So we keep going - not because we are convinced that it is right, but because we have passed the point of no return.