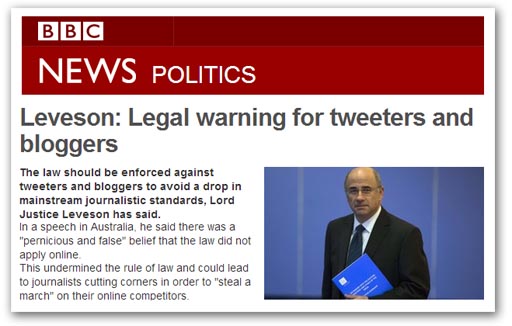 Dellers has an interesting post, taking on board the treatment of shale gas by the "legacy media", and in particular an article by Andrew Rawnsley.

The context is the comparison between the "legacy media" and bloggers, the former being the preferred source for the clever-dicks and much of the political classes. And there is an important difference between the two, according to Lord Justice Leveson. Mainstream journalists, he says, have "a powerful reputation for accuracy" while bloggers and tweeters were "no more than electronic versions of pub gossip".

But, says Dellers, while the Rawnsley piece is combative, provocative and seething with but-barely-contained righteous rage, every word written by the Chief Political Correspondent of Britain's once most-revered serious newspaper is "total, abject, weapons-grade toss".

However, there is no point in going to the "legacy media" for more and better particulars. If you want to be informed, you have to go to a specialist blogger. But the author of the one Dellers highlights on shale gas is not a professional journalist at all. Says Dellers, he's one of those dangerous blogger fellows Lord Justice Leveson warns us about: the type whose opinions are no better than an "electronic version of pub gossip".

Via Leveson, therefore, we get a glimpse of the great divide. One the one hand, you get support from the establishment for a failing industry which in turn supports a failing establishment and a political system which is in terminal decline. On the other hand, those people who want to be informed eschew this failing industry and go to the blogosphere.

The trouble is that Leveson is partially right, although he does us no justice by combining tweeting with blogging, the former have been described as "blogging for morons". Even then, a large number of people seem to have difficulty understanding what a blogger actually is. One sees contributors to comment threads being described as bloggers, and even media articles being called blogs.

Then, it is fair to say that the majority of the millions of blogs published are sheer dross, but included in that number are thousands authored by professional journalists. Many of those simply repeat the sins of the print media, and belong in the dross category with the rest.
On the other hand, heavyweight independent blogs are largely ignored by the legacy media, who rightly treat them as competition that they cannot match in terms of quality and depth.

Thus, one sees the contrast between the lightweight frippery of Newsnight and the serious exploration of the issues by Witterings, the former with the funding and the exposure, its quality being in inverse proportion to both.

Interestingly, a few enlightened politicians are beginning to realise that some blogs provide access to a degree of expertise that is no longer available in the legacy media, and are increasingly relying on them. Too many, though, are still wedded to lightweight media analogues such as Conservative Home and Guido Fawkes. These are to serious blogging as gossip columns were to news reports and comment.

Nevertheless, many targeted blogs producing quality material are being listened to in Westminster and even in Whitehall. Their relatively small audiences (although we get 30,000-plus unique visitors a week) are more than compensated for by the quality of their readership. One is thus sometimes amused to see the legacy media apparently ignoring these sources, yet using their material once it has been picked up by sympathetic politicians, or even stealing it themselves.

Speaking for ourselves, therefore, the Leveson warning holds no terrors. He might argue that "the law should be enforced against tweeters and bloggers to avoid a drop in mainstream journalistic standards", but the reality is wholly different. We and many other specialist bloggers could not afford to drop our standards to the level of the legacy media.
Because we do not lower our standards, and because we are closer in touch with our own audiences (who tend to keep us honest), the blogs are creating their own independent conduits to power, and are breaking the media monopoly on the flow of information.  Perhaps that is the real reason why Leveson is worried by them.
COMMENT THREAD