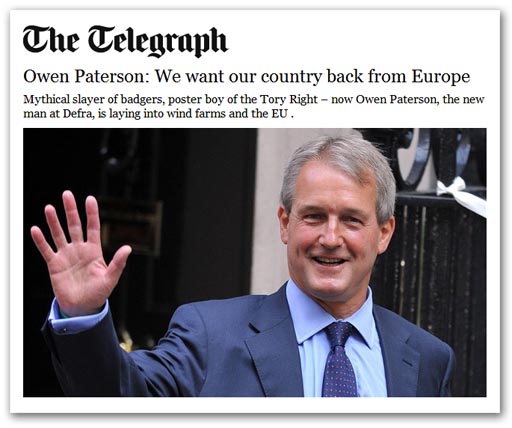 The man dubbed the "unknown Cabinet minister" comes out into the open today with a stinging rebuke for the "instant outers", telling us that we can't just tear up all the EU legislation and walk away from it.

As secretary of state for Defra, he is only too well aware that, in his department alone there are 40,000 pages of environmental regulations that originate somehow in the European Union. "You can’t just chainsaw them", he says. "You would still need laws to regulate the health of farms and the safety of abattoirs".

This is a man who tells us his views on Britain and the EU are well known. He is counted among those around the Cabinet table who would opt for the exit. Furthermore, he genuinely holds that position, and has done so for many years, arguing that "we'd do a lot better if we made a lot more laws locally in our own Parliament".

Paterson also has a better idea of what is happening than many. He points to what is going on as a result of the euro crisis: the EU is forging ahead with integration as a way of saving the single currency and the European project.

Far from Britain leaving the EU, it will be the EU leaving Britain, he says. "If in order to resolve the Euro crisis there has to be this new arrangement that’s effectively creating a new country … from which we're excluded, [then] we want to get our country back which means making our laws in our own Parliament".
That is the nub of the issue. It is why it makes sense to wait a little until the fog over the Channel clears and we can see the shape of the new entity. That will tend to polarise public opinion here, and make it more likely that independence would be acceptable to the majority.

If we had a referendum now, Paterson believes ,we could well lose it. He prefers instead to pursue was his department's audit of EU competences, consultation on which was launched two weeks ago. This is the first time we have ever looked at how we are governed in this country, he says, the results of which he is sure will shape the future debate on the EU.

That "we want our country back", Brogan writes in his piece, is a phrase that will echo loudly with all those who have been clamouring for David Cameron to give the British people a chance to do just that in an "in-out" referendum.
The Prime Minister is due to set out his thinking in a major speech in the next few weeks. Paterson, argues that the British public feel dangerously isolated from the European process. "It doesn't matter how you vote, you'll still have whatever directive you don’t like imposed upon you".
Nevertheless, he stresses that the "Doomsday Book" audit of EU competences is an important step towards negotiating our exit. "Everyone talks about Europe, but this isn't Europe at all", he tells us. "This is our day-to-day government, this is how we run things". Paterson gets "fed up with the E-word" though. He declares: "This is not about Europe. This is about how we run our country on a day-to-day basis".

He looks beyond the EU and sees prospects for trade with the Anglosphere, and with the giants of China and India. The world is evolving fast, and so is the EU. Britain's relationship with the EU will evolve too. "They are going to leave us… [the Commission] has come up with a very clear plan for what is effectively a new country".

Likewise, he asserts, we must come up with our own plan for how Britain will manage its own affairs when the EU does leave us, and it is that which must be put to the country.

And, while he has plenty to say on the other matters for which his department is responsible, from the moment he took over at Defra, "Europe" has dominated his in-tray. And, having written a landmark study in Opposition on the Common Fisheries Policy, he is well equipped to understand the detailed technical issues.

He is particularly scathing about this "disaster" that is depleting our waters and driving British fishermen out of business. If the Tories were in power alone, he would be arguing for withdrawal from the CFP. That said, the Coalition appears to be on course to secure a ban on discards by which "perfectly good fish" are dumped dead overboard because they don't count towards the quota.

There speaks a politician having to deal with real-world politics. Those distant from power can readily indulge in their fantasies about repealing the ECA and walking away from the EU overnight, but in Owen Paterson, we have a minister who has taken the time and trouble to explore the practicalities involved in standing on our own two feet.
It took him two years to produce his study on fisheries and he is conscious that it would take many more years to thrash out a workable policy. And as the debate on the EU intensifies, we will be hearing more of this practical approach, making it all the more probable that this "unknown" minister will not be unknown for very much longer - even despite the Independent.