Climate change: what can one say? 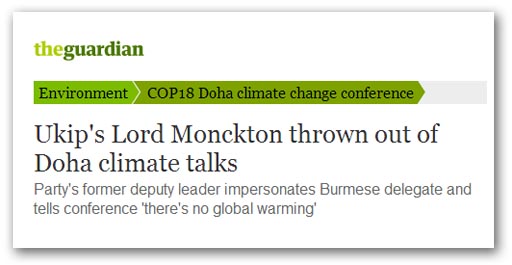 The former deputy leader of UKIP, Lord Monckton, has been ejected from the Doha climate change talks and permanently banned after impersonating a delegate from Burma on the conference floor, says the loss-making Guardian.

"At one of the sessions, Monckton assumed the seat for Burma in place of the real delegate, and addressed the hall from his microphone. He spoke for nearly a minute, before being escorted out".

"He was ejected from the conference centre, had his badge revoked, and is thought to have left the country. The UN later confirmed he had been permanently barred from future rounds of the talks. Monckton did not respond to requests for comment by the loss-making Guardian.

In the Guardian version of the address, Monckton told the conference: "In the 16 years we have been coming to these conferences, there has been no global warming at all. If we were to take action, the cost of that would be many times greater than the cost of taking adaptation measures later. So my recommendation is that we should initiate a review of the science to make sure we are all on the right track".

He was booed and heckled by other delegates, says the Guardian script, a claim repeated by Louise Gray in the Daily Telegraph. However, Mr YouTube does not support this claim, once again demonstrating much attention the legacy media give to reporting the truth.
The real delegates have now gone into extra time in an attempt to reach an agreement on how to bleed even more money out of the process than they already have done.