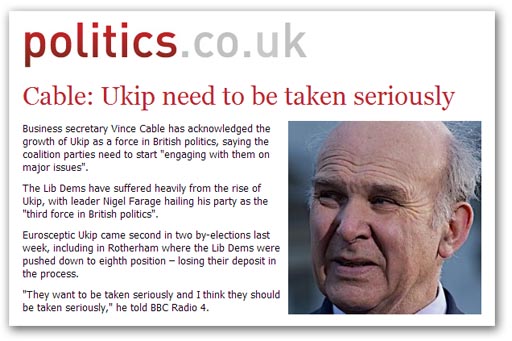 If I am slow off the mark, having not yet completed an analysis of the by-elections and the events surrounding them, it is because there is a lot of information to process and a lot of thinking to do.

In the land of instant comment, though, the legacy media have already dumped their load and moved on, having barely scratched the surface of an issue which is far more than the apparent (more apparent than real) rise of UKIP and the collapse of the Lib-Dims.

Nevertheless, the internet has continued the dialogue and we see some intelligent comment on Your Freedom and Ours and some really interesting comments on the forum. Autonomous Mind, plus the comments, is also worth a look.

Also useful is a local blog called Rotherham Politics which gives some further insight into this troubled constituency, illustrating how slight has been the media coverage. Not least is a running catalogue of the ills of the Labour Party and a piece which entertains the thesis that UKIP and BNP are effectively interchangeable.

This latter piece is a hostile comment, and differs from my assertion that it is the electorates that are interchangeable, with UKIP and BNP basically talking to the same (rather limited) audience.

However, while the affairs of UKIP are interesting and relevant, the meltdown of the Labour Party has hardly been touched upon by the legacy media, although we got a hint of the troubles in a recent edition of the Morning Star, and there was some coverage in Private Eye.

This brings us back to the developing Szamuely thesis, where she muses on the reluctance of the electorate to turn to minority parties, when they are fed up with establishment politicians.

Looking to our history here does not help at all. Going back to the 1920s, and the emergence of the Labour Party as a force in politics, which eventually displaced the Liberals, cementing in its prominence in the 1945 election, we had a situation where a disaffected electorate switched loyalties.

Now, we are seeing the same disaffection but, instead of switching loyalties, the electorate is progressively opting out of the political process altogether.  Two of Szamuely's commenters take the argument further, (here and here).
The latter suggests that we have a crisis of democracy in that the parliamentary system has well passed its shelf life. He then asserts that, "The parliamentary systems should have been seen as part of the struggle towards more democracy not the end of the struggle", adding:

Parliamentary democracy can no longer be described as such because democracy stops at parliaments doors. The people are now excluded from decision making and government and they know it and have lost hope and lost interest knowing that their influence does not matter other than superficially. The political elite and powerful vested interests now rule so that we have the "government of the people by the few for the few".

That is the debate that the legacy media is ducking. We are seeing narrowly-focused reporting, in which a personality-driven media has temporarily transferred its attention to the flawed persona of Nigel Farage.

But, despite Vince Cable's effluvia (pictured top), not even Nigel can fix this one. On the other hand, Mrs EURef has a magnetic fridge sticker which declares, "Gin'll fix it", but I fear that mothers' ruin is not the answer either. All of this means that we are in uncharted waters. If people really are deserting the political process – and that is where the evidence points – then most of the drive-by political punditry is wide of the mark.
Tectonic plates are moving, and the politico-media bubble seems determined to ignore the rumbling. In the earthquake that follows, one can imagine that the denizens of this bubble will be the first to be swept away.