2012-12-02 19:56:49 The Szamuely (pronounced Sam-you-elly) has cogitated on current events and delivered a fine piece on her blog. It is a lot more perceptive, I feel, than some other commentary, this one by Peter Hitchens.
Exploring some of the issues raised (by both pieces to which I link), I must be careful not to misrepresent either, but if I take the Szamuely piece first, I don't think I've got it too far wrong if I suggest that one of her opening theses is that the publicity on UKIP's recent "success" in Rotherham has been somewhat over-hyped. 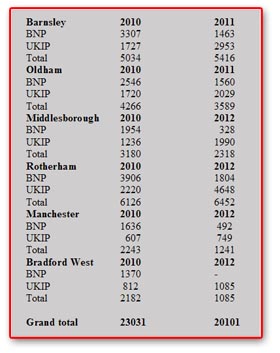 Before going any further, I think it is helpful to dwell on that a little more, recalling that, in my earlier piece about Rotherham, I noted that, in the 2010 general election, UKIP and BNP polled a combined vote of 6,126. This time, between them, UKIP and BNP gained 6,452 votes - the combined votes being within a few hundred of each other.
Although neither party will admit it - and UKIP especially - to a certain extent BNP and UKIP votes are interchangeable.  Both being anti-immigration parties, they are appealing to the same audiences. And, at Rotherham, I advanced the thesis that all that had happened was that UKIP had scooped up BNP votes and thus swapped positions in this league.
There are good reasons for believing this to be the case as, over the past few years, we have seen a spectacular - if unreported - collapse in BNP, torn apart by internal dissent.  If the voting for the two parties is interchangeable, one would expect a relative decline in BNP votes, and a matching increase in the UKIP vote.  And that is precisely what we are seeing.
Looking at the by-elections since the 2010, we see that there have been six in the North of England, where BNP tends to be most active. These are Barnsley, Oldham, Middlesborough Rotherham, Manchester and Bradford West. In total, the two parties polled 23,031 votes in the six seats in the general, and in every single one the BNP beat UKIP.
Now, with the collapse of BNP, over the same six constituencies, the total by-election vote has dropped to 20,101 (with BNP failing to put up a candidate in Bradford West) and, in every single instance, UKIP has beat the BNP.  Effectively, as in Rotherham, the positions have simply reversed.
By reference to the chart (above left), this phenomenon is quite clearly illustrated. In Barnsley, for instance, another of UKIP's "successes", BNP took 3,307 votes in 2010, as against UKIP which took 1727.  In the 2011 by-election, the positions were reversed, UKIP took 2,953 votes. BNP took 1,463. Overall, the vote increased only by a few hundred, from 5,034 to 5,416.
We see a similar effect with Oldham, where BNP takes 2,546 votes in 2010, against UKIP's 1,730. In the 2011 by-election, again we see the positions reversed, with UKIP getting 2,029 votes and BNP polling 1,560. Overall, the combined vote goes down, from 4,266 to 3,589.
This overall drop we see applying to the total of the six seats, Votes cast for the "anti-immigration parties" in 2010 were 23,031 as against 20,101 in the by-elections. With a total electorate of 591,054, that represents votes from 3.9 percent, dropping to 3.4 percent of the electorate - one fifth of the average votes cast for the winning parties.
Incidentally, while the average mandate for the winners of the last six by-elections stands at 16 percent, the average for all twelve by-elections since 2010 is 19.2 percent. UKIP's percentage for the twelve stands at 2.7 percent (3.3 percent for the last six).  Taking less than three percent of the electorate with you over twelve by-elections cannot be considered, by any measure, a "surge".
Thus, the Szamuely thesis holds - with a vengeance. Any progress UKIP has made is marginal and, in the North of England, it is very far from an electoral breakthrough.
COMMENT THREAD