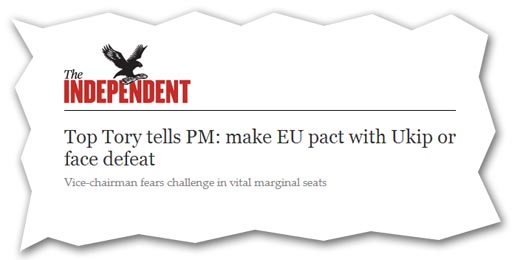 On 7 July 2012, Booker raised the issue of Article 50, as a means of withdrawing from the EU. The piece drew a response from "veteran campaigner", Torquil Dick-Erikson, in the following terms:

Article 50 is a trap: In the typical Napoleonic-state style, with one hand it purports to grant a right, the right to withdraw from the EU, but with the other hand it restricts it, so much so that it reduces it to nothing. The catch, hidden within article 50, lies in the two-year waiting period that a withdrawing state must wait before it can consider itself sovereign once again, if no agreement on the terms of withdrawal is reached with the others.

He was answered (by me) thus:

I would suggest that you have misread the Article. The two year period is a maximum, unless there is an agreed extension. See 50(3):

The Treaties shall cease to apply to the State in question from the date of entry into force of the withdrawal agreement or, failing that, two years after the notification referred to in paragraph 2, unless the European Council, in agreement with the Member State concerned, unanimously decides to extend this period.

In this instance, Torquil did not respond to the comment. But again, this time on 24 November 2012, Booker raised the issue of Article 50. And we got this from Torquil Dick-Erikson:

What Booker does not deal with here is the fact that Article 50 imposes a forced 2-year waiting period on any State that announces its intention to leave, and that does not wish to supinely accept the terms that the remaining EU would want to impose on it …

Christopher Booker has raised the idea of using article 50 before in his column. And here he is doing so again. I hope that next time he will deal with the issue of the enforced two-year waiting period that is imposed by this article. An imposition that prevents us from conducting negotiations for a new arrangement from the strong position of regained sovereignty.

Again he was answered:

Article 50 does not impose "a forced 2-year waiting period on any State that announces its intention to leave". The article actually says:

The Treaties shall cease to apply to the State in question from the date of entry into force of the withdrawal agreement or, failing that, two years after the notification referred to in paragraph 2, unless the European Council, in agreement with the Member State concerned, unanimously decides to extend this period.

It thus sets a maximum timescale for the negotiations, of two years, which may be extended by mutual consent.

As before, Torquil did not respond to the comment. Instead (and as before), he e-mailed his own comment – and only his comment - to a select group of activists, reinforcing his own view that the only way to leave the EU was to repeal the European Communities Act 1972 – a proposition with which his correspondents completely agree.

My response last time was to note that there is a group of eurosceptics imbued with an absolute determination to fail. To keep the faith, they confine their discussions to themselves, never engaging in debate with anyone outside their circle. However, their malign influence on the likes of UKIP ensures the currency of a policy line – immediate withdrawal from the EU – which hands the game on a platter to the other side.

They offer a strategy guaranteed to maximise the disruption and uncertainty, reinforcing the europhile claims that leaving the EU would be a "disaster". Under the terms of our eurosceptic clique, it most certainly would be so.

Out problem is that, as long as this self-deceiving rump of eurosceptics maintain their position, the likes of David Cameron can appear entirely reasonable in rejecting the idea of withdrawal. Only if they offered a well-structured exit plan, aimed at minimising disruption, would the eurosceptic doctrine pose a real threat.

There, of course, Mr Cameron has a way of completely neutralising the eurosceptic threat, if he choose to take it. With his very substantial resources, he could devise his own exit plan, couched in such terms as to make it clear that we would no longer be members of the EU, but defining a new relationship that was very litte different from full membership.

That would involve the UK withdrawing from the existing treaties which place our nations in the EU, instead forging a new treaty which would have the UK in alliance with the EU. That would entirely confirm with the traditional British policy towards Europe – interested but not absorbed.

Currently, in the pages of the Independent, Tory MP Michael Fabricant advises Mr Cameron to do a deal with UKIP. He should, the Conservative vice-chairman says, set out plans for a referendum on EU membership in exchange for UKIP not standing in the next general election.

On the other hand, there is no need for a referendum. Instead, Cameron could invoke Article 50, offering precisely the "new relationship" with the EU which he professes to want. This would bury UKIP completely. A Conservative Party, genuinely seeking a new settlement with "Europe" would leave Farage and his not-as-merry-men completely stranded, electorally isolated with nowhere to go.

However, there is another, perhaps more important reason why Cameron should take this line. Apart from the electoral advantages, which could guarantee him victory at the next general election, the constant bickering over EU membership is a dangerous distraction from the business of government. In order to focus on the issues at hand, this issue needs to be settled – and it will not go away of its own accord.

Invoking Article 50 and negotiating a new relationship with the EU is entirely compatible with Conservative Party policy, and with Mr Cameron's personal aspirations. The fact that it is an option so hated by the eurosceptic groupuscules could be taken as a bonus.