Media: today's opinion will be … 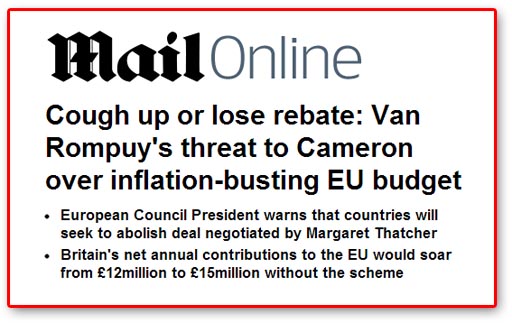 You might think that we should be interested in Mr Cameron's manoeuvrings on the EU multi-annual budget negotiations. But, as with most things in the media on the  EU, this is agenda-setting fluff. Its real aim is to keep our attention diverted from the substantive issue.

The only issue of serious interest with the EU is when we are going to leave, but that is the very last issue on which the powers that be (TPTB) want us to focus. Thus we get this elaborate posturing about peripheral issues. This gives the legacy media something to chew on and gets the juices flowing in commentariat, which seems to care little about what it discusses, as long as its masters throw it a bone or two.

This manipulation of public sentiment is a fascinating, if poorly studied phenomenon, but is an important part of the way we are governed. Basically, the game is to keep us focused on the things that TPTB consider harmless, or controllable, and away from the danger points.

The techniques are, of course, as old as the hills, with attempts to manipulate public opinion going back as longs as there has been a "public" to have an opinion.

Of this, I am learning more and more, especially with my current area of study – looking at the 1940 London Blitz. In trying to assess what was really going on in the East End, as opposed to what the media was saying, there is one tantilising reference in Harold Nicolson's diaries, to the King and Queen being booed by the crowd as they made one of their morale-boosting tours.

Such, you might think would be the sort of "news" that the Press would be only too keen to report, except that both censorship and self-censorship ensured that nothing of this reached the newspapers. You will look in vain for such references.

But what you do get in an obscure contemporary journal is a paper from Ted Bramley, the London Communist leader, who was directly involved at the coal-face, so to speak.

"The reaction of the people is very significant", he wrote. "It varies and is a little different area by area, according to the experience through which people have gone. In East and South-East London particularly, there is no other topic of conversation. All energy and thought is first devoted to getting a bit of food, a bit of sleep, and shelter".

"But at the same time", he went on to explain, "there is widespread expression of bitter dissatisfaction. Universally they demand better and safer shelters. There are more bitter expressions of class hatred against the rich than I have heard for years".

"The capitalist press", Bramley continued, "has worked overtime writing up the courage and patience of the East Londoners. The King and Queen have been worked extensively" – a reference to the use of the Royal couple for propaganda purposes. And then we have the money quote:

We have been treated in the Press to appropriate remarks between the King and his people. But the most significant remarks are not reported so widely. The man who shouted "We want bomb-proof shelters" and got charged with insulting words and behaviour; the man who, when the King said "My home has been bombed too", replied, "Yes, which one?"

In "working" the Royal couple, the authorities wanted to see, and the Press to report, the loyal subjects, cheering the King and Queen, grateful for their attention and concen. And, to make sure that happened, anyone who did not perform to script was either kept out of earshot, or promptly arrested and bundled away.

The Press, having decided "the line", was only too happy to conform, and thus told their readers what they felt they should be told – which had very little to do with what was actually happening.

This goes on all the time. The legacy media even boast about it. At the head of the Telegraph website, one sees the claim that the paper is "setting the agenda": that is more revealing than one could possibly imagine. The paper is not there to report the news – it is there to "set the agenda", i.e., to tell you what it thinks you ought to know.

By and large, we fall for it. The legacy media run a story and the sheep mentality takes over. We all follow the lead, commentators, bloggers and the rest, diligently reporting and discussing that which TPTB have defined.