EU Referendum: no change in the polls 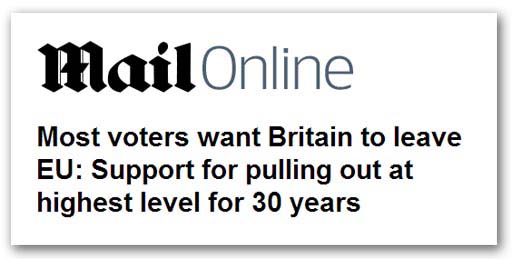 "Support for Britain pulling out of the European Union is at its highest level for 30 years, a Mail on Sunday poll has found. If a referendum on leaving the EU was held tomorrow, 51 percent say they would vote to leave, while just 34 percent would opt to stay". Or so we are told.

Now go back at to 13 July 2011, and the Daily Mail. Then, it told us, that a poll released to the paper "shows the public would vote by 50 to 33 percent to abandon Brussels if a referendum were held tomorrow, a huge lead of 17 points".

And the lead from the current poll is … er … 17 points. The Mail has got its story wrong. On the basis of its own polling, since July last year, there has been no change in the level of support for leaving the EU.

Now, if after 16 months of the most horrendous publicity you could possibly imagine, there is absolutely no change in overall sentiment, then it is fair to argue that we have not made much progress.

We also have to remind ourselves once again that, in August 1974, a private poll conducted for the Labour Party showed that, should there be a referendum on membership of the Common Market, 50 percent would vote to leave, against 32 percent who would vote to stay in, a "huge" lead of 18 points.

At around the same time, Gallup confirmed these proportions, with a poll coming out at 47-30 percent in favour of leaving. That was 17 percent,  exactly the "huge" lead about which the Mail is yet again crowing, and which YouGov reported last July.

Before getting there, on 24 January 1975, there was a Gallup poll for The Daily Telegraph which gave 41 percent to the "outers", compared with 33 percent for those who wanted to stay in.

But when asked, "If the Government negotiated new terms for Britain's membership of the Common Market and they thought it was in Britain's interest to remain a member, how would you vote?" The response of decided voters was 71 percent "in" and 29 percent "out" – very close to the final result.

Now, go back to the 2012 YouGov poll, and we get 55 to 45 percent (of those decided) for staying in. That is still a sizeable majority against us, albeit an improvement on the final result in 1975.

The point though is that Cameron most likely is going to offer a renegotiation deal. On past and current form, we will lose a referendum if that happens. And, most certainly, if we listen to the Daily Mail we will lose.

Fortunately, the "colleagues" are set to move the goalposts, and some of us have better ideas for a winning strategy. As it stands, though, I would not be at all confident about winning a referendum - not that there is actually going to be one this side of a general election.