EU budget: running out of money 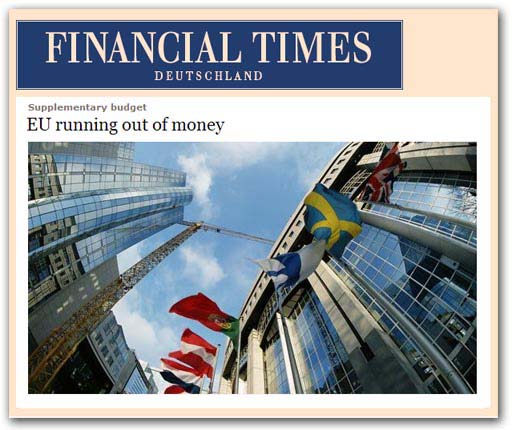 One can almost feel sorry for David Cameron – or one might possibly think about it - when the Daily Wail gets hold of this, and he has then to explain it to his back-benchers and the media at large.

Actually, the Financial Times Deutschland is being a bit previous, as it is relying on chairman of the Budget Committee in the EU parliament, Alain Lamassoure. It was he who told a press conference yesterday that the EU is running out of money, and will need to find at least another €10 billion to balance the books.

Lamassoure thinks of this situation as "absurd". It arisies from member states approving research commitments, which are significantly higher than there is money to pay for them. And since, under treaty law, the EU has to balance its books (unlike member states), it has no option but to come running for more money.

The issue, here, is that we are in the penultimate year of the seven-year financial period. Many projects which have been approved within the period are now finished and are due for payment.

However, as this is not an official Commission estimate, it will largely be ignored – MEPs at work are largely invisible to the British media. But when, in the fullness of time, the "colleagues" come round with their begging bowl, Mr Cameron is going to have to find about Ł1 billion to put in the kitty.

Doubtless, there will be a fudge, where the oustanding debt is somehow carried over into the next accounting period but, if Lamassoure is right, it will be difficult to conceal the overspending.

The bad news is that this may only be the tip of the iceberg. The structural fund account also looks to be in deficit to the tune of about €13.5 billion and, with the bad harvests throughout Europe, CAP spending is on the rise.

With only one more year left of the seven-year financial period, the Commission will have to come clean towards the end of this year, when it will have to put up an amendment budget to cover the funding gap.

Then poor Mr Cameron will have his work cut out telling us how important it is for us to be members of the EU. In may even be possible that a few people might disagree with him.