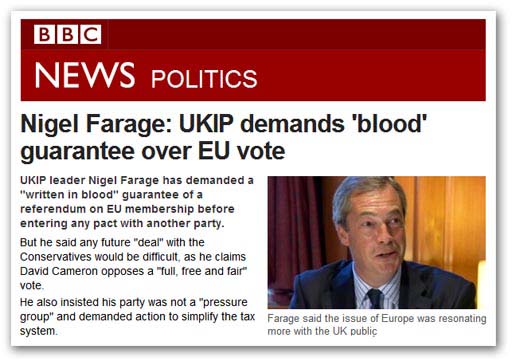 Farage put his finger on the Cameron dilemma this morning, pointing to the Conservative leader's credibility gap when it comes to promising a referendum.

Talking on the BBC Radio 4 Today programme, he said that he would only consider making a deal if it was "written in blood" that there would be a[n in-out] referendum on Britiain's EU membership.

What was not raised though – not here or in an earlier programme - is how different the political landscape will look in 2014 when the euro-elections are due to be held. Thus, although Farage consistently claims rising support for his party, he and his followers may be disappointed when it comes to the elections.

Not least, the much lauded poll ratings consistently fail to materialise as votes in real elections.

So consistent is this experience that one can discount the UKIP election hyperbole. And, to make matters worse, there is recently another factor in play. As the Independent reports, in all the recent by-elections, both Labour and Conservatives scored "landslide gains" at the expense of independents.

We may thus be seeing precisely that which we have seen in Germany and in the recent Dutch elections – the classic small-party squeeze, which is so often apparent when times are uncertain. And where the UK election is shaping up for a battle between two unpopular personalities, perversely, that tendency might be accentuated.

In recent years, however, the euro-elections have obeyed their own rules, and Farage might confidently expect a good showing for UKIP in 2014. But again there is another factor at play: Barroso has committed to publishing proposals for a new treaty before the euro-elections. With the commission president determined to make this an EU election issue, electioneering could be sufficiently transformed to make it mainstream – to the detriment of UKIP.

With Cameron planning a major speech on European policy next month, he may well take the opportunity then to commit to a referendum, contingent on renegotiations arising out of the treaty process, essentially marginalising UKIP and its pretender, the "We demand a referendum" party.

Here, the Conservatives are in a much stronger position, as polls on EU sentiment tend to show that the renegotiation option (however unrealistic) is popular with the voters, and Cameron can rely on the "referendum lock" to demonstrate his good faith. He does not need to make a promise "written in blood", he may say, when it is written into an Act of Parliament.

This does not stop speculation elsewhere about electoral pacts with UKIP, from the usual ill-informed suspects, who currently don't seem to understand that the chances of a referendum before 2016 are slight. In all probability, we are looking at 2017 or beyond.

Those, like Nikki Sinclair's little party - which has dreams of a referendum in 2014 – clearly fail to realise that Cameron can use for an alibi, active engagement in EU negotiations. No sensible person could expect a referendum while negotiations are still in progress.

To that extent, also, the Tory europlastics are beginning to outflank the "outers". Knowing that renegotiation is more popular with the public than the straight "out" option, they have concentrated their firepower where success is most likely. That could well leave Farage and his supporters stranded, being faced with fighting a referendum in the distant future for which they are singularly ill-prepared.

The "outer" fraternity thus looks doomed to get what it wished for. And unless Farage stops whingeing about how the contest might be rigged, and starts working out how to win the referendum we're going to get, rather than the one UKIP wants, the wish granted could prove his nemesis.