Foreign trucks: the elephant on the road 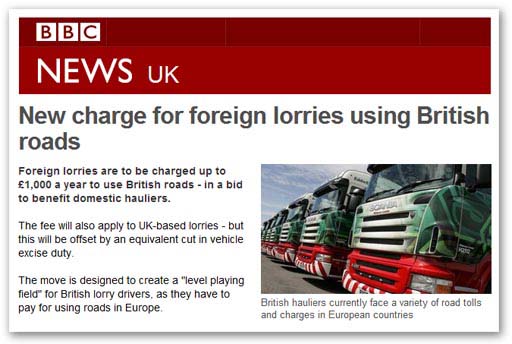 Courtesy of our state broadcaster, the BBC (reported also by others), we learn that foreign lorries "are to be charged up to Ł1,000 a year to use British roads - in a bid to benefit domestic hauliers".

Readers will also learn that the fee will also apply to UK-based lorries, although they are then assured that "this will be offset by an equivalent cut in vehicle excise duty".

But, if people are puzzled by why the government has gone to such convoluted lengths to obtain money from foreign truckers – charging everybody and then refunding British firms – they will get no help at all from the BBC.

For that you will have to go to the original government consultation document, which happily refers you to the source of the problem, the EU's Eurovignette Directive. As a related document spells out, under EU law (Art 18 TFEU), no system is permitted to discriminate between road users according to their nationality or place of residence.

Therefore, in order to charge EU drivers for using our roads, we are in the absurd situation of having to apply exactly the same charging system to domestic-registered trucks, then refunding the money through the vehicle excise duty system.

However, it doesn't stop there. Keen observers will note that the maximum charge for a foreign truck is Ł1,000 a year, while the maximum road tax for a British HGV is Ł1,850. Thus, foreign truckers are potentially able to run their vehicles in the UK for just short of half the fees of the British competitors.

The reason for this, of course, is that the Eurovignette Directive sets a maximum limit on the charge (in euros), and we are not allowed under the current regime to charge more.

Needless to say, we are no told of this by the media. In fact, in one newspaper, John Redwood is allowed to burble: "This is great news … This change gives a level playing field for the British truck driver". But, despite what Mr Redwood says, the "playing field" ain't level, or anything close.
Perhaps the clever Mr Redwood should have talked to Road Haulage Association chief executive, Geoff Dunning. For sure, he says it was a "happy day" for road hauliers, adding: "We have been campaigning for years to see a system introduced which will lessen the financial advantage currently enjoyed by our European neighbours".

But Dunning then says that the Ł1,000 levy, "is not enough to give us a level playing field as regards the rest of Europe". For him, it is simply "a good start". It is, though, as far as the EU will allow us to go, leaving huge distortions in place that cannot be remedied under the current regime.

Sadly, therefore, the only real level playing field is the uniformly lamentable treatment of the story by the media, which will never tell you what is really going on. That elephant on the road, it seems, has become a protected species and must not be disturbed.