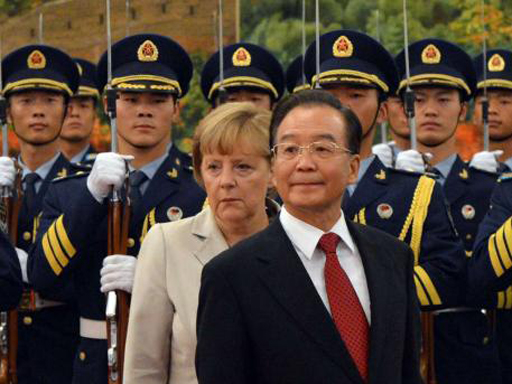 Somewhere over the Atlantic, there's a presidential election going on, with the Americans showing their latter-day genius for picking a Republican candidate who stands a good chance of losing to lame-duck Obama.
With the military adventures related to the Global War on Terror scaling down, the allies staying resolutely out of direct involvement with Syria, and a lack of any political chemistry between Cameron and Obama, the "special relationship" seems less vital at the moment than it has for a long time.

Thus more important in the grander scheme of things is not the US election, but next year's German federal election, where the people of the strongest economic power in Europe will decide on the leader who could well take us into the next and final step of European political integration.

The current leader – who on recent performance looks a credible candidate for winning the election – has arrived in China (her second state visit this year) and has met Premier Wen Jiabao, who says he's worried about the worsening debt crisis.

Thus the chancellor comes, according to Bild, with a long list of "needs", not least of which is for the Chinese to open the taps on the $3.2 trillion foreign exchange reserves, and pour them into the EFSF.

That is what they said they would do in February, but they held back and instead bought tangible businesses such as electricity suppliers in Portugal, ports in Greece and other such assets. But at least they have bought 50 Airbus A-320s, for €3.5 billion, some of which will find its way to the UK, but that is a drop in the ocean.

Nevertheless, with all eyes on the outcome, Germany's popular daily is calling the Merkel adventure her "Euro mission". Germany saves the world! Forget Captain Euro. Frau Merkel is on the loose.