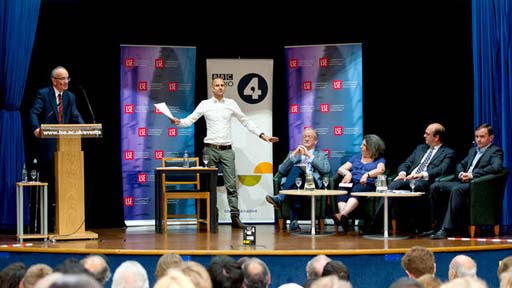 A piece today by Ambrose Evans-Pritchard on a growing crisis in the shipping industry unwittingly sheds a great deal of light on the EU debate, insight that was entirely lacking in the broadcast debate last week on whether we should stay in the European Union.

Central to this debate was the assertion – so often heard and this time articulated by Sir Stephen Wall, "former diplomat and EU adviser to Tony Blair" – that only by remaining in the EU can we keep our place at the table where the rules are decided, input to which are vital to our status as a trading nation.

With this in mind, turn to Ambrose's report which charts the fate of global container shipping, an industry where Germany is the "superpower", controlling almost 40 percent of the global market.

Here, while the root cause of a "long-simmering crisis" is over-investment in new ships to take advantage of the boom in trade with China – the promise of which has not been sustained - the proximate cause is the drying up of funding. Over 100 German ship funds have already shut down and a further 800 are threatened with insolvency.

The reasons thus for the intensification of the crisis are not the trading conditions, per se but financial, and the essential reasons for this, according to market analysts, are "the high capital and rising liquidity requirements under Basel III".

Under this regime, banks are being forced to raise capital ratios too fast – and too soon – choking lending to the real economy. Most of the 20 top banks for the shipping industry have stopped all funding.

As to the linkage between this and the debate, is the issue of who makes the rules. We have in the squeeze on lending a set of rules which have had a massively damaging effect on Germany – to the benefit of Greece, according to Ambrose.

These rules, though, do not originate from the EU, but from the Basel Committee on Banking Supervision, where the UK is an extremely powerful player, alongside the United States. Germany is a committee member yet does not seem to have been able to tailor the rules to her own advantage.

One point, of course, is that membership of an organisation does not necessarily mean that the rules can be shaped to the advantage of any particular member. But the more important point is that this vital area of rule-making is outwith the EU. The EU is, in fact only an observer on the committee. The UK is a full member, and would remain so even if it left the EU.

This issue, we have touched on before, most recently with UNECE, and as we explore the role of such bodies, it becomes more and more evident that a huge amount of the rules attributed to the EU are in fact made by other bodies, and simply processed by the EU.

In discussions about the UK leaving the EU, the Norwegian model is often mentioned, with the claim that this country has to accept all the rules of the single market, without the ability to shape them.

Yet, if one searches "Norway" and "UNECE", there are thousands of references. Norway, as a country, is very actively engaged in rule-making, at a level upstream of the EU. When the EU gets involved, it is in taking the "soft law", decided by countries such as Norway, which it then processes into local law. This body takes its "orders" from UNECE, not the other way around.

In this context, another relevant issue raised in the broadcast debate was social protection for employees. But, as in so many initiatives, the EU is once again a downstream rule-maker. Many of the EU's programmes actually originate from the International Labour Organisation, another treaty body of which the UK is a member, and which feeds the EU with standards which it turns into law.

The points made by Stephen Wall, therefore, simply do not stand up. We do not need to be members of the EU in order to influence the laws which we adopt. But neither does being a member of any organisation, per se, guarantee our influence.

However, there is yet another interesting issue which arises. With UN bodies, the tendency now is for the UK to work with other EU member states to work out a "common position" on most items. The UK's seat at the table, therefore, is increasingly used to represent the EU rather than the British position. If we left the EU, we would be speaking for ourselves again. The national interest would be strengthened, not weakened.

Despite this, Wall was allowed to make his argument a centrepiece of his presentation in the debate, unchallenged on these points by the panel. What came from them was depressingly familiar, the same old arguments that we have heard for twenty years or more.

It does seem to me that the arguments on the EU have ossified. Groups and individuals have developed their narratives which have then become fixed in time, beyond the reach of change or development.

For instance, the "place at the table" meme run by Wall is wearily familiar, but easily countered. Yet none of the established groups is even trying to do so. They remain in their comfort zones, each side then trotting out the same old mantras, predictable, stale, and boring – talking largely to themselves.

If we are to engage the wider public – and win any possible referendum – we are going to have to do much better.