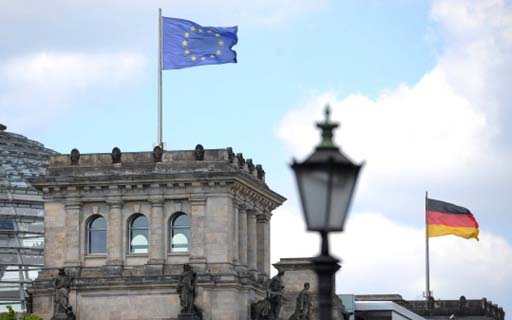 If the title is a statement of the "bleedin' obvious", it still needs re-stating occasionally, as it is ever more evident that events in Germany are going to have a crucial effect on the future of the project.

And, according to Die Welt, the stresses are building to intolerable levels, the paper saying that Merkel is going to have to choose between keeping her coalition going and saving the euro. She is not going to be able to do both.

With the EU now being called, in derogatory terms a "liability union", "it is not clear" how Merkel can convince her troops to approve her rescue programme. Every additional million that flows to Athens destroys the credibility of her centre party.

Handelsblatt is basically saying the same thing although, oddly enough, this is nothing new in German politics. We were writing in similar terms in May 2004, which just goes to show that there is nothing new under the sun.

What is new, though, is talk of an EU referendum in Germany. Raised in June by Schäuble in an interview in Der Spiegel, and then by others, we find Reuters reporting that support is growing for a referendum on further European integration.

Earlier in the week, leader of the opposition Social Democrats (SPD), Sigmar Gabriel, backed the idea. And latest of the politicians to repeat the call is Horst Seehofer, the head of the Bavarian Christian Social Union, the sister party to Merkel's Christian Democrats (CDU). He is saying that ordinary Germans should be consulted more on big European decisions, emphasising that the EU could not remain a "project of the elite".

Der Spiegel, which broached the referendum meme on June, is now assessing the odds, also citing The Economist, which is offering a trivial piece, backed by an editorial which asserts that, "for all you know, Angela Merkel is even now contemplating how to break up the euro".

Greece is buckling, it says, much of southern Europe is also in pain, while the northern creditor countries are becoming ever less forgiving: in a recent poll a narrow majority of Germans favoured bringing back the Deutschmark. A chaotic disintegration would be a calamity. Even as Mrs Merkel struggles to find a solution, her aides are surely also sensibly drawing up a plan to prepare for the worst.

As always, though, the grasp of European politics is scant, and the role of the EU institutions under-played. And, while German politics are doubtless going to play a crucial part in the EU's fate in the short-term, which we ourselves acknowledge in our opening, the likes of Barroso and van Rompuy have yet to make their plays.

However, in an event that has an interesting historical resonances, on 25 July, Merkel opened the Bayreuth Festival, the annual Wagner fest which offered drama every bit as gripping as that to come with the fall of Greece.

Another notable to attend the festival on the brink of great events was Adolf Hitler. On 23 July 1940 – just as the Battle of Britain was unfolding - he attended a performance of Wagner's Götterdämmerung – the last time in his life he was ever to see a live performance of Wagner.

His childhood friend, Augustus Kubizek, recalled the chancellor telling him: "I am still tied up by the war. But, I hope it won't last much longer and then I'll be able to build again and to carry out what remains to be done".

Thus year, Merkel could have been thinking much the same, with the long war for European union once again interfering with the leader's plans. What comes round goes round. The current chancellor, politically at least, may not survive the experience either.