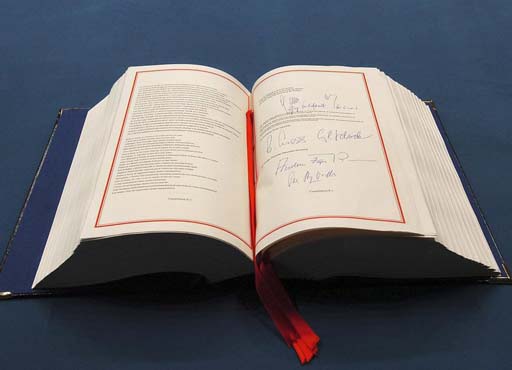 It is a measure of a certain faction of the eurosceptic "community" that the debate over Article 50, raised by Booker and this blog is still raging – and is no closer to resolution.

We saw some of the arguments in my earlier piece, but what is interesting is groupuscule attitude to our original assertion that the best way to quit the EU is to invoke Article 50.

Even to assert this, it would appear, is wrong. By stating my view, say some members of this faction, Richard North is causing us to fall out and "is going out of his way to undermine UKIP and their leader over this, causing dissent". Thus we are told:

The only possible reason we could put forward is that Richard, after 18 months sharing the same desk as Nigel Farage, has turned against anything that Nigel puts forward … Regrettably these schisms, which so often occur within the anti-EU movement, are what holds back a united front against the EUSSR.

It seems, therefore, that one must not offer views which differ from those promulgated by the Great Leader, otherwise this causes "dissent".

To call the discussion on Article 50 a "debate", however, is perhaps being too kind. The attitude seems to mirror exactly the authoritarianism of the EU that the groupuscule so detests. It makes ex cathdra statements and then re-states the same points without conceding anything which contradicts the received wisdom. It then demands unquestioning conformity with the "line".

An example of the technique comes with yet another intervention from Ashley Mote. He continues to argue - without change - that, following the UK's notification of withdrawal, what follows are "so-called negotiations" over a period of two years.

This is starting point from which it is impossible to progress. If the negotiations mandated by Article 50 are not seen as genuine, then one can go no further. And indeed, according to Idris Francis, they are unlikely to be so as the "colleagues" are "liars, cheats and scum". And with that, the groupuscule consensus is that Article 50 is "a trap".

No one, of course, is prepared to substantiate this assertion – it remains a raw expression of prejudice with nothing whatsoever to support it.

On the other hand, there is every reason to believe that the withdrawal clause is entirely genuine. First introduced in 2003 by the European Convention on the Future of Europe, it actually goes back further, to the Italian Communist and latterly MEP, Alterio Spinelli, author of the draft treaty of the European Union.

His work was later to form the basis of the Single European Act and the Maastricht Treaty and, even then – according to his political strategist, Richard Balfe – he was a strong advocate of including a withdrawal clause in the treaties.

Spinelli was by no means alone, although some favoured a withdrawal clause for other reasons – specifically, after decades of what they saw as Britain as a "reluctant partner", they very much wanted to give her an opportunity to leave, in the hope that they might the British government take it up.

Either way, Article 50 stands as the only measure within the EU treaties that enables member states, as of right, to demand negotiations.

This, of course, is not good enough for the likes of Ashley Mote, who maintains his standard doomsday scenario. Once the "so-called negotiations" start, his scenario is that the EU would mount a huge and sustained PR campaign in the UK to "warn" us of the terrible consequences of leaving.

In order to invoke Article 50, though, the UK would have to lodge formally its intention to withdraw – the decision to leave would already have been made.

Despite this, our own taxpayer's money would be used against us in a sustained campaign to undermine the then UK government's objective, says Mote. Every incident, problem, crisis would be "sold" to the BBC and the other pro-EU media as being the direct and inescapable result of the UK's decision to leave. Then develops the Mote fantasy:

Any and every EU regulation and directive which has been passed into UK law would be nit-picked over and reinforced with threats of fines and prosecution in the European Court of Justice … Any interim activity planned by the British government would also be examined microscopically for any apparent unlawful activity, and again policed with threats. It would be a logistical and administrative nightmare for the then UK government.

We raised this before, but stopped short of shredding it.  Nevertheless, this is truly fantasy of the most bizarre kind. It takes anything up to five years for the EU to take infringement proceedings through to the ECJ. Over a two-year time span of Article 50 negotiations, there is simply not enough time for the Mote scenario to take effect.

We could go further, but there is no great point. Speaking for the groupuscules, Idris Francis betrays a deeper prejudice. He tells us that the Harrogate Agenda project is seen as "a wrecking device intended to disrupt if not wreck UKIP's chances", not least because of "personal issues and vengeance". In other words, says Idris, "hatred of UKIP that has become more important to those involved than their hatred of the EU or desire to leave it".

Idris, incidentally, conveys almost with a sense of pride, the fact that he does not read the EU Ref blog. Had he lowered himself to do so, he would have realised how mad his claim actually is. Needless to say, Idris does not make it to my face. That might cause dissent, and that is not allowed.
With those sort of "eurosceptics", you cannot have any debate.