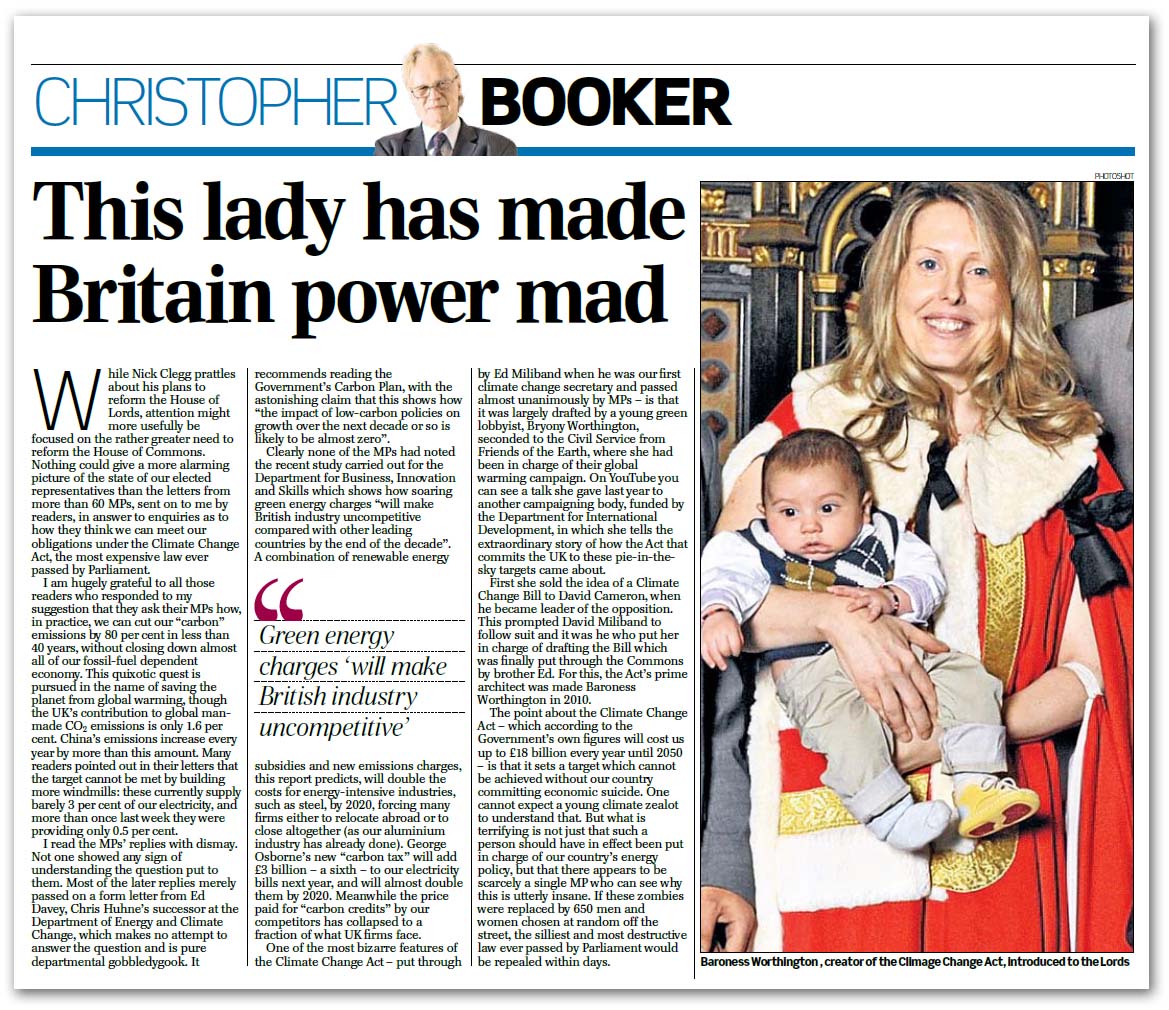 A week on from our Harrogate Conference and the Booker column gives us an excellent reason why the House of Commons needs reform.
It is all very well Nick Clegg prattling about his plans to reform the House of Lords, but Booker tells us of his experience with trying to get sense out of MPs over the Climate Change Act.

Nothing could give a more alarming picture of the state of our elected representatives, Booker says, than the letters from more than 60 MPs, sent on to him by readers, in answer to inquiries as to how they think we can meet our obligations under the Climate Change Act, the most expensive law ever passed by Parliament.

Not one of the MPs showed any sign of understanding the question put to them. Most of the later replies merely passed on a form letter from Ed Davey, Chris Huhne's successor at DECC, which makes no attempt to answer the question and is pure departmental gobbledygook.

It recommends reading the Government's Carbon Plan, with the astonishing claim that this shows how "the impact of low-carbon policies on growth over the next decade or so is likely to be almost zero".

Clearly, says Booker, none of the MPs had noted the recent study carried out for the Department for Business, Innovation and Skills which shows how soaring green-energy charges "will make British industry uncompetitive compared with other leading countries by the end of the decade".

A combination of renewable energy subsidies and new emissions charges, this report predicts, will double the costs for energy-intensive industries, such as steel, by 2020, forcing many firms either to relocate abroad or to close altogether (as our aluminium industry has already done).

George Osborne's new "carbon tax" will add È3 billion  a sixth  to our electricity bills next year, and will almost double them by 2020. Meanwhile, the price paid for "carbon credits" by our competitors has collapsed to a fraction of what UK firms face.
One of the most bizarre features of the Climate Change Act  put through by Ed Miliband when he was our first climate change secretary and passed almost unanimously by MPs  is that it was largely drafted by a young green lobbyist, Bryony Worthington, seconded to the Civil Service from Friends of the Earth, where she had been in charge of their global warming campaign.
On YouTube you can see a talk she gave last year to another campaigning body, funded by the Department for International Development, in which she tells the extraordinary story of how the Act that commits the UK to these pie-in-the-sky targets came about.

First she sold the idea of a Climate Change Bill to David Cameron, when he became leader of the opposition. This prompted David Miliband to follow suit and it was he who put her in charge of drafting the Bill that was finally put through the Commons by brother Ed. For this, the Acts prime architect was made Baroness Worthington in 2010.

The point about the Climate Change Act  which, according to the Governments own figures, will cost us up to È18 billion every year until 2050  is that it sets a target which cannot be achieved without our country committing economic suicide. One cannot expect a young climate zealot to understand that.

But what is terrifying is not just that such a person should have in effect been put in charge of our countrys energy policy, but that there appears to be scarcely a single MP who can see why this is utterly insane.

If these zombies were replaced by 650 men and women chosen at random off the street, the silliest and most destructive law ever passed by Parliament would be repealed within days.

And that is why we have to focus on MPs. Whoever they are working for, it isn't us.