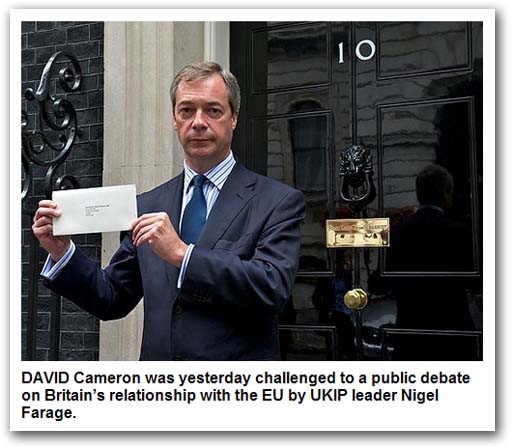 Although commissioned with less than honourable intent, the Audit of EU Law presents a major opportunity to reinvigorate a tired debate. Certainly the FCO clearly intends to use this audit as a propaganda exercise, and we can see in the fullness of time a studied attempt to dominate the EU debate.

Dishonest though this might be, for the eurosceptic community, it demands a response. Since the audit intends to find out how EU action in each field of policy advantages and disadvantages the UK, it is essential that details of the latter are recorded.

This presents UKIP with the difficult task of actually compiling a list, and staking its claim to be part of the debate, but there is every indication that it intends to duck the challenge.

After complaining that the audit did not go far enough, the next response has been for the Great Leader, Nigel Farage, to deliver a letter to No. 10 demanding a referendum on whether we should quit Europe. He then tells his audience in Sedgley that he would join forces with the Tories, in exchange for a referendum, with no mention of focusing his party on making the case for leaving the EU.

However, there is going to be no referendum until Mr Hague has finished his EU Audit, allowing the material thus produced to be used to fuel the ongoing debate. Thus, while Farage wastes his time playing Postman Pat, he is focusing on the wrong things and risks being left with nothing credible to offer in the ongoing debate.
We really cannot afford to have the only dedicated anti-EU party drop the ball like this. Resources are slender enough as they are, without being wasted in this egregious fashion.