The "brutal ice" doesn't go away 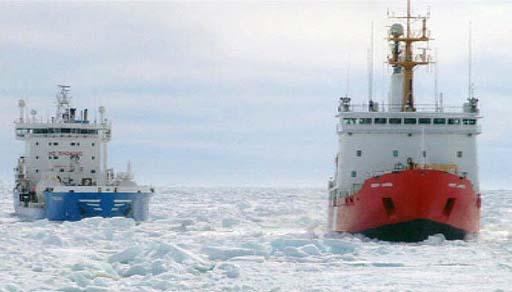 Remember this from January, with the Canadian icebreaker struggling through the Bering Sea?

Well, coming up for mid-summer, and the ice still hasn't gone away. The local Alaska Despatch is telling us that those brutal sea ice conditions that northwest Alaska battled all winter haven't receded in parts of northern Canada.

And now, two resupply ships are stuck waiting at the mouth of Frobisher Bay in Iqaluit because of tough ice conditions. In June, winds and currents pushed heavy ice in to the area, leaving two Canadian Coast Guard icebreakers trying to trying to punch a way through the ice.

However, because the ships lack the power and the ability to make close-coupled tows, the ice is closing in around the icebreakers before their charges can follow.

Oddly enough, there were similar complaints on 23 July 2008, the year after the "big melt", with "unusually heavy ice conditions" at the mouth of Frobisher Bay.

We could have great fun with the warmists on this, especially as the conditions on the ground do not seem to accord with the NSIDC observations. But, as we have come to learn, sea ice extent seems to have less to do with temperature than it does wind and current conditions.

And it is very much these factors which are affecting ice extent up in the Labrador Sea, at the Frobisher Bay inlet, as they do every year and, although the wuzzies will always claim global warming when the ice retreats, we know better.