Referendum: no longer under control 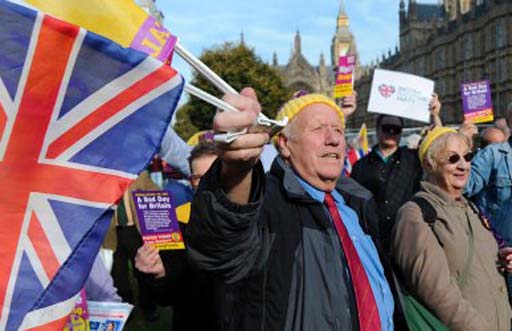 When a subject generates high levels of media traffic, the closed loop effect starts to take over. The politicians may have started the meme running, but the media responds, the politicians react, media then reacts to that, and so on and on.
There then comes a point when story develops a life of its own and it continues running without much new input. Generally, these sorts of stories then tend to keep running until the issue is resolved, one way or another, and there is some sort of closure.

So far, we are in the high traffic phase, where every Tom, Dick and Crawford piles in, with derivative "noise" which adds very little to the sum of human wisdom, other than Crawford, however, wishes to make a point: "Now is not the time to commit to an EU referendum", he says. "We don't know what we want".

What is interesting is that the egregious Peter Mandelson who, a mere two months ago was calling for a referendum, is saying the same thing.  He has decided that, although he still wants one, he doesn't want it just yet. Yet it is impossible to disagree with the man when he suggests that it is not a good idea to hold a referendum as a short-term expedient to keep the lid on the anti-EU hardliners on the Tory backbenches and as a panicky response to the rise of UKIP.

To be even-handed, he also suggests that it is not a good idea for Labour to attempt to try to drive a wedge in the Tory party. This would not be in the national interest and "is only a way of managing — or exacerbating — the intolerable pressures inside the Conservative Party". It would turn an issue of genuine principle into one of short-term politics.

Ever the optimist, Mandelson then postulates that, should the eurozone repair itself and become "the core of a much more politically integrated Europe", Britain will have to make a "profound choice" about its own future in Europe.
Says the former commissioner, staying outside this "federal Europe" would have "potentially far-reaching consequences for our country: in trade, in governance, in global influence. We would have to make the decision to exclude or include ourselves only after a serious national debate".

As to a referendum, therefore, it is hard to see, he says, how else Britain could make such a huge step with the necessary legitimacy. But this is not a case for a referendum tomorrow, but five to ten years from now, when the future direction of the EU is clear, and when we have a genuine choice to make.

This is a man who does not seem to be up to speed, considering that he is a former commissioner. The kind of referendum he is considering might be upon us sooner than he imagines.

But what is really interesting here is that Mandelson, after being so keen, so recently, on a referendum, really does not want one. No one envies David Cameron's position, he says, but he should not embark on the same road taken by Hague, fighting a general election on EU issues.

Cameron should concentrate on digging his government out of its omnishambles and rediscover the sense of direction and competence he demonstrated at the beginning of his term. He cannot afford any further vote-losing distractions, European or otherwise.

Finding clues is not easy, although it is interesting to see that Spiegel has also caught the referendum bug, publishing a long piece with the contentious title: "Better Off Outside?"

The magazine concludes of Britain that "exit seems more likely than ever", stating that many leading British politicians from all sides of the spectrum now believe that a referendum on EU membership is unavoidable. It is entirely possible, it says, that the British could indeed vote in favour of leaving the EU.

But there are echoes of the Mandelson theme, with us being told that Cameron "hopes to postpone the referendum issue for a few years". A vote only makes sense when it is clear what is being voted on, he says: but that is impossible to predict, given the current developments in the eurozone.

So it is that we are seeing an increasingly number of people who really do not want a referendum any time soon. All the same, right up to press, Cameron does not seem to know what he is letting himself in for.

To the Commons Liaison Committee yesterday, he insisted: "If the 17 countries of the eurozone bring about a banking union for themselves - which I frankly think they need to do in a single currency - if they do that at the level of the 17 and we can get proper safeguards in place, then that wouldn't be a fundamental change for us".

"So", he adds, "I don't think that would in and of itself trigger a massive change for us in the EU".

Here, there, is another man who either does not know what is going on, or chooses not to reveal what he knows. Most close observers are fully aware that a banking union requires fiscal union which requires political union. If Cameron does know this, he is treating his audience with contempt. If he does not know, he is dangerously ill-informed.

The truth, though – as the political claque on the Telegraph is beginning to realise – is that Cameron's EU policy is "a puny vessel at the mercy of a tempest". Slowly but relentlessly, he is being driven towards the referendum commitment he would rather avoid. He has no choice in the matter.

And that is why this issue is going to run and run. Many of the commentators, who know little of the issues, can smell the fear. They are attracted to it as a moth is to a flame.