Getting out is not so hard to do 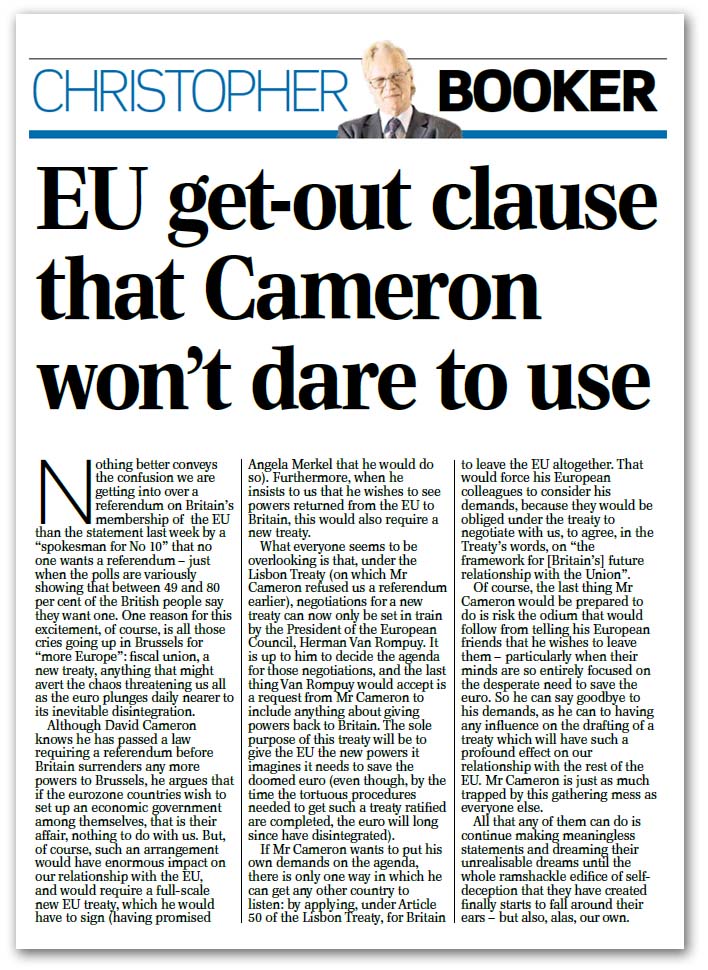 If the Tories are really serious about wanting to negotiate a new relationship with the EU, then they have the means to do so. Furthermore, they can insist on the "colleagues" entering into negotiations. All they have to do is invoke Article 50 of the Lisbon Treaty.
This we explored in two pieces last week (here and here), noting that the one thing that is not possible any more for a member state to do is to highjack an IGC and insist on imposing its own agenda. That is, effectively, ruled out by Article 48 of the Lisbon Treaty – the treaty for which Cameron rejected a referendum.

These points are now picked up by Booker in this week's column, putting on the public record the very real option available to David Cameron and the Tories.

Problematically though, as Booker reminds us, the very last thing Cameron would be prepared to do is risk the odium that would follow from telling his European friends that he wishes to leave them – particularly when their minds are so entirely focused on the desperate need to save the euro.

But unless he does so, he (and we) can say goodbye to his demands, as he can to having any influence on the drafting of a treaty which will have such a profound effect on our relationship with the rest of the EU. Cameron is just as much trapped by this gathering mess as everyone else.

Unless they are prepared to bite the bullet, and invoke Article 50, all that any of the Tories can do is continue making meaningless statements and dreaming their unrealisable dreams until the whole ramshackle edifice of self-deception that they have created finally starts to fall around their ears – but also, alas, our own.

One just wishes that they, and their fellow-travellers such as Open Europe would not take us for fools. They need to realise that, when it comes to EU rules and procedures, there are many of us who know the territory far better than they do – not least Booker.