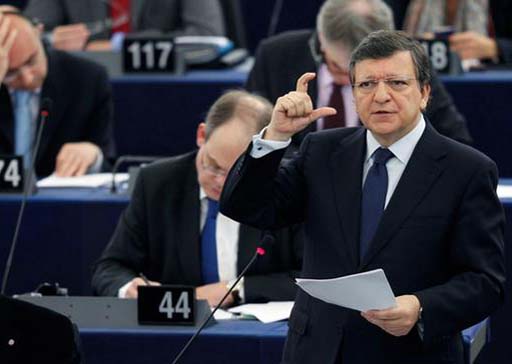 "We are now in a defining moment for European integration and the European Union", says José Manuel Durăo Barroso , president of the EU commission.

He was addressing MEPs in the EU parliament in Strasbourg, ostensibly speaking to a: "Joint European Parliament Debate on the forthcoming European Council meeting and the Multiannual financial framework".

These are the things designed to make you want to give up the will to live, before you have even got past the title.
"We are seeing", says Barroso, "that even when governments are taking the right steps towards reform, they can be negatively impacted by events beyond their control, or by the lack of decisive and comprehensive long-term response".

You have to love his scriptwriters: "negatively impacted by events". There are less delicate ways of putting it, but they would lack the style: "We must recognise that we have a systemic problem and we need to articulate the vision of where we need to go, and a very concrete path for how to get there".

By now, the undertakers are moving in to clear out the dead and the dying, and we suddenly discover that there is some value in getting the rest off the BBC, who have staff specially immunised in order to deal with this stuff.

So, when it is all translated, Barroso is saying that European governments need to agree urgently on steps to forge a closer union because of the eurozone's "systemic problem". But, says the man: "I am not sure whether the urgency of this is fully understood in all the capitals".

"Fragmentation is not an option," he adds. The EU must continue allowing for opt-outs, such as the refusal of the UK and Denmark to join the euro, but "they remain the exception, not the rule", he said.

This is all platitudes though. We are not getting anything substantive – as in a response to the Bundesbank, but then the speech was probably written a few days ago. AFP via the Failygraph and others, therefore, plucks a single phrase out of the speech. The EU is in a "social emergency", we are told.

But, actually, what Barroso said was: "I will continue to urge them at the European Council to take the social emergency situation very seriously. In some of our countries we have worrying developments in terms of the rise of poverty and social exclusion".

Anyway, he says: "It is always easier to talk about the problems of others, thus distracting from one's own. But in the end, we all have challenges. Ultimately, these are common challenges. We need to address them together, also on the global scale".

He then concludes: "Thank you for your attention”, leaving Guy Verhofstadt, leader of the liberal group ALDE, to say: "the problem is not Europe - the problem is not enough Europe! … Federal Europe is the solution".

We would never have guessed.