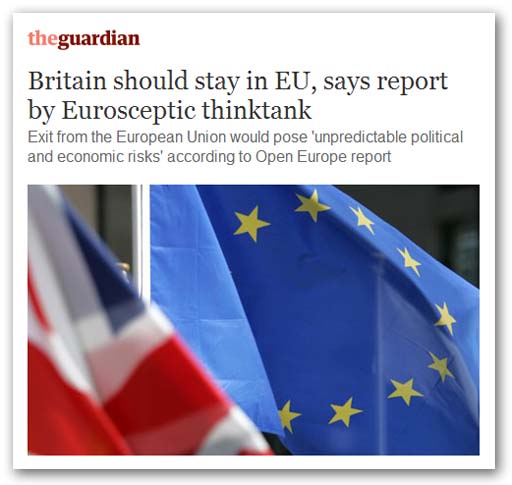 Here at EU Ref, we do occasionally take a little bit of flak for urging caution about others who parade under the label "eurosceptic" – so it is a pleasant change to get an e-mail this morning telling us we are right about one of our targets: Open Europe.
We have long argued that this organisation, which claims eurosceptic credentials, is a front organisation with little to chose between it and the overtly europhile organisations such as Business for New Europe. And now it has come out, demonstrating clearly that it is a thoroughly europhile organisation.

The event concerned is a report, which was lovingly publicised yesterday by The Observer, arguing that Britain should stay in the EU.

Under the false flag of a "eurosceptic think tank", authors Stephen Booth and Christopher Howarth offer a limited and utterly dishonest argument against a British exit from the European Union, based on the premises that it would pose "unpredictable political and economic risks".

The pair go on to argue that from "purely a trade perspective", Britain should remain in the EU, then asserting that, "there is a value to the UK's ability to influence not simply the terms of trade but also EU foreign policy and enlargement".

To achieve their end, Booth and Howarth argue against the "Norwegian" option or EEA membership. They agree that this would free the UK from the CAP, EU fishing rules, EU-wide regional policy, and reduce its budget contribution, but this is not for them.

To counter these very obvious attractions, they say, "while guaranteeing access to the Single Market in services and goods, outside the customs union, access for goods would be subject to complex rules of origin ".  Then, putting the boot in, they declare: " Britain would still be subject to EU regulations on employment and financial services but with no formal ability to shape them".

This, of course, completely ignores the diqule and the role of the multitude of international organisations and conventions to which we subscribe, which have a vital and continuing function in framing Single Market standards.

To assert that, outside the EU, we would have "no formal ability" to shape laws and standards promulgated by the EU is simply one of those europhile myths which amounts to a naked and wicked lie.

In fact, where now the EU negotiates for us on the basis of a "common position", as it does in the WTO, outside the EU but in the EEA, our voice would be restored and we would revert to a powerful, independent player.

The timing of Open Europe's outing is interesting, especially as it is matched by europlastic (and now openly europhile) MP George Eustice, who now asserts that "Britain can do better than leave the EU. We can change it". Once again, we get the deadly mantra that, "Britain would do better to drive reform from within than leave and risk losing all the benefits".

At least now the enemy has come out into the open, shedding any pretence. There can be no doubt now that we are dealing here with europhiles, even if it takes the media some time to get used to the idea (if ever).

The fact that Open Europe has been a false flag operation for so long, though, warns us to take nothing at face value. Those who present themselves as eurosceptics are not necessarily so, and even those who appear to support the eurosceptic agenda may have other motives. Sadly, the contents do not always match the label on the tin.