Eurocrash: Britain on the way out? 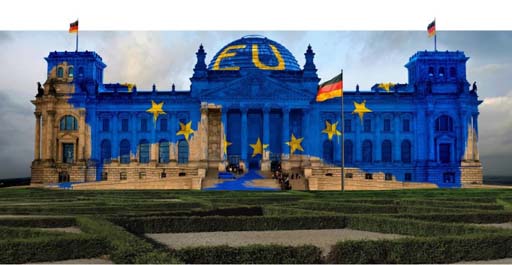 It looks as if the "colleagues" are plotting the exit of the Britain from the European Union as we know it or, to be more precise, as it is about to become.
This comes from Welt online, where there is a report that Merkel is trying to break free from the perpetual cycle of short-term crisis management, and "to think about how we move forward over the next five to ten years".

In the offing, is seems, is a secret "master plan" for the future of the EU, which is being hatched up by Van Rompuy, Barroso, Euro Group President Jean-Claude Juncker and the head of the ECB, Mario Draghi.

The quartet was given its instructions at the dining club meeting on 23 May in Brussels and the plan is set to be unveiled at the European Council later this month, of which it is said, this "could be a revolutionary document".

Under conditions of great secrecy, four areas are being looked at, we are told: structural reforms, the banking union, a fiscal union and political union. And, whatever the actual content, all parties are reported to be agreed that another major treaty will be needed.
Crucially, it is also being mooted that there will be a high price for the treaty – a division between the 17 eurozone countries and the remainder. Britain, whether it likes it or not, could be on the way out.

This is a change in strategy for European integration but, says an anonymous central banker, "this change of strategy has to come". It is the defining element of Europe's monetary union.

The implications of such a development for the UK are, of course, phenomenal. If, as is indicated, the "colleagues" are set on a new treaty – and quite soon from the look of it – Cameron and his merry men are shortly going to be required to make crucial decisions which will formalise an "outer circle" role for the UK.

Given current public sentiment, there would appear to be no alternative, as there is not the slightest possibility that Britain might join EMU and take part in the "inner circle".

Unless we move fast, though, this means that the British relationship with the new grouping will be defined not by us but the "colleagues", necessarily on their terms. The need, therefore, is now to define what we require and even whether we will accept what some might declare is "second-class" status, or strike out in new directions.

As such, the idea of an in/out referendum – always tenuous, at best - is essentially dead in the water. Events, as predicted, are to be decided elsewhere, leaving the British struggling to catch up.

However, there is nothing to say that the new "inner circle" will be at all feasible, or even accepted by all 17 members of the eurozone. The attempt at what amounts to the final step at integration may be the step to far, and presage the break-up of the entire European Union.

Either way, there is a massive opportunity for the UK – our very own "beneficial crisis". This is the opportunity to reverse the tide of integration and set the agenda for the next decade and beyond.