The curse of the occupied field 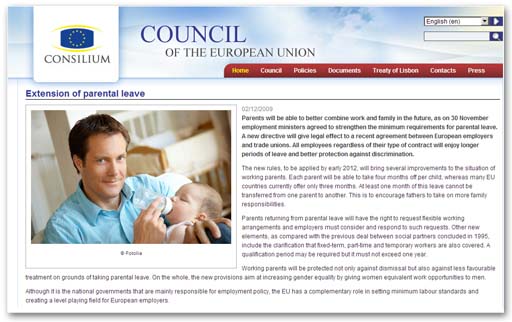 Cameron seems to be getting himself in an awful mess over the "controversial" Beecroft report, with accusations flying that he is suppressing key recommendations warning that the "coalition's family-friendly policies would undermine Britain's economic recovery".
In its usual self-important way, the Failygraph ponderously announces that "a document leaked to The Daily Telegraph shows that three proposals in the controversial Beecroft report were removed after being submitted to No10 before it was sent to the Business Department".

The report, "it can be revealed", called for the Government to delay plans to introduce flexible working for parents, to abandon proposals to allow all workers to request flexible working, and to remove regulations surrounding the employment of children.

Well, in this exclusive report we can reveal that the europa.eu website has not leaked to EUReferendum.com the contents of Council Directive 2010/18/EU (above). Despite this, we can now reveal from looking at the website that it was approved in principle by the Council on 2 December 2009 (top) - Mr Brown's administration, I believe.
We can also exclusively reveal that we have looked at lots and lots of websites and, from documents seen by EUReferendum.com on those websites, we can reveal that employment law is an EU competence. Furthermore, we can reveal that, with this directive, parental leave (which includes provisions for flexible working) becomes an occupied field.

Under the above directive, we can also reveal that, not only is the UK is obliged to implement new arrangements for parental leave this year, it cannot make any changes to national law on such matters without the express approval of the EU commission.

Similarly, we can exclusively report that the employment of children is also an occupied field, and has been since the promulgation of Directive 94/33/EC of 22 June 1994. Again, we can reveal that this means no changes can be made to national law without the express approval of the EU commission.

As we revealed yesterday, Cameron is therefore severely limited as to what changes he can make to employment law. He is reduced to finding marginal issues, where he can cut back some of the excess, then making a big deal of what he has done, spinning it for all that it is worth.

But, on these issues, he has quite evidently been caught out.  Rather than admit he has no power to make changes, we see the clumsy attempt to remove recommendations which might reveal this embarrassing fact.

However, why Cameron (or his staff) should be so concerned remains a mystery. Not anywhere in the Failygraph is there a single mention of the European Union, nor even the slightest hint of where the problem lies.
These dim little hacks simply can't do "Europe". Their poor little brains can't cope with the idea that their darling boy-child is no longer in charge. The embarrassment is of our national press, which is no longer capable of reporting the news or telling us what is going on.
COMMENT THREAD