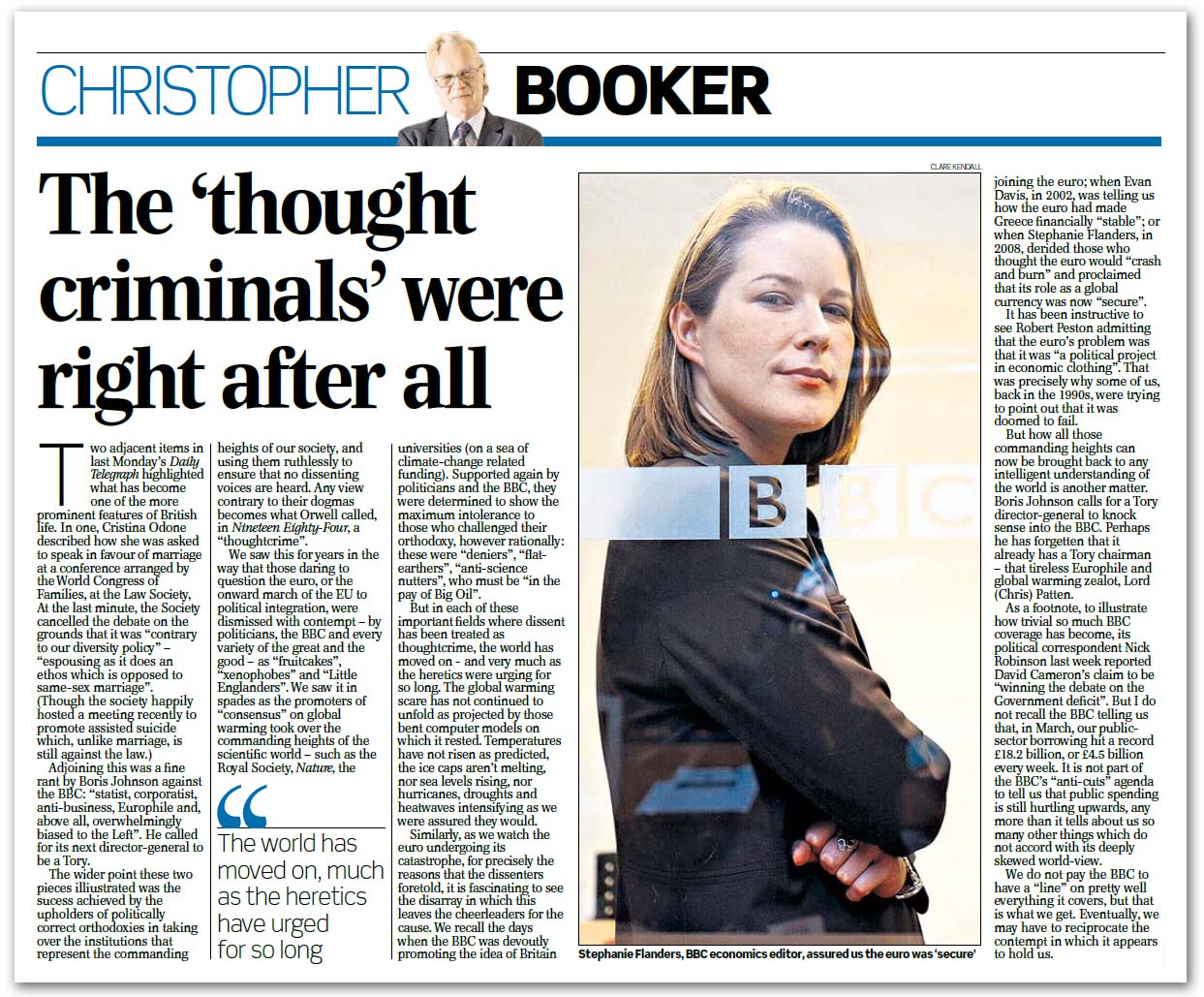 There was a time, perhaps, when you felt that there was free speech in this country but, as Booker writes in his column this week, the upholders of politically correct orthodoxies have taken over the institutions that represent the commanding heights of our society, and are using them ruthlessly to ensure that no dissenting voices are heard.
Any view contrary to their dogmas becomes what Orwell called, in Nineteen Eighty-Four, a "thoughtcrime". You can't have an honest disagreement these days, without being insulted and vilified by the very institutions which we pay for from fees and taxes.

We saw this for years in the way that those daring to question the euro, or the onward march of the EU to political integration, were dismissed with contempt  by politicians, the BBC and every variety of the great and the good  as "fruitcakes", "xenophobes" and "Little Englanders".

We saw it in spades as the promoters of "consensus" on global warming took over the commanding heights of the scientific world  such as the Royal Society, Nature and the universities (on a sea of climate-change related funding).

Supported again by politicians and the BBC, they were determined to show the maximum intolerance to those who challenged their orthodoxy, however rationally: these were "deniers", "flat-earthers", "anti-science nutters", who must be "in the pay of Big Oil".

The thing is though, that these vile people are so often wrong. In each of these important fields where dissent has been treated as thoughtcrime, the world has moved on - and very much as the heretics were urging for so long.

The global warming scare has not continued to unfold as projected by those bent computer models on which it rested. Temperatures have not risen as predicted, the ice caps arent melting, nor sea levels rising, nor hurricanes, droughts and heatwaves intensifying as we were assured they would.

Similarly, as we watch the euro undergoing its catastrophe, for precisely the reasons that the dissenters foretold, it is fascinating to see the disarray in which this leaves the cheerleaders for the cause.

We recall the days when the BBC obsessively promoted calls for Britain to join the euro; when Evan Davis, in 2002, was telling us how the euro had made Greece financially "stable"; or when Stephanie Flanders, in 2008, derided those who thought the euro would "crash and burn" and proclaimed that its role as a global currency was now "secure".

It has been instructive to see Robert Peston admitting that the euro's problem was that it was "a political project in economic clothing". That was precisely why some of us, back in the 1990s, were trying to point out that it was doomed to fail.

But how all those commanding heights can now be brought back to any intelligent understanding of the world is another matter. As far as the BBC goes, though, Booker has his own remedy  that we reciprocate the contempt in which it appears to hold us.