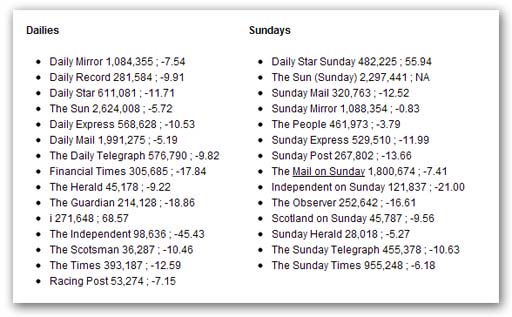 We have been looking at current newspaper circulation figures,  published by the ABC circulation bureau, with some interesting results.
The last time we looked, for instance, the circulation of The Times newspaper had dropped to the daily average of 413,233, a year-on-year loss of 11.38 percent. Four months later, the same paper is selling 393,187 copies a day, representing an increased rate of loss at 12.59 percent, year-on-year.

For The Times this is a particularly savage blow, as the expected result of Murdoch's paywall strategy was that it would prompt an immediate rise in readers buying printed issues. The immediate response, following the introduction of the paywall in July 2010 was a fall in circulation, with it dropping below the half-million mark on August 2010 (494,205).

Then, having cut its cover price to 50p, the Daily Mail registered a circulation of 2,169,690, a 2.45 percent increase on July and its best circulation figure of the year. But now it stands at 1,991,275 copies a day – not quite the same precipitate fall, but a decline nonetheless. At the turn of the century, the paper was doing 2.35 million sales a day.

This illustrates a more general trend , right across the board, where decline in sales is universal and well-established. In August 2010, for instance, The Guardian, already in the decline, was selling 272,112 copies a day. November 2011 saw it selling 226,473.

Still, of course, the newspapers are reaching huge numbers of people, but the industry is unmistakably in decline, and with it goes its authority. In ten years' time, some of the titles we see on the news stands will no longer exist.

However, given their current standard of writing, their choice of writers and their lacklustre grasp of the issues, their authority will have dissipated long before that. Sadly, when they finally disappear in physical form, they will not be missed.