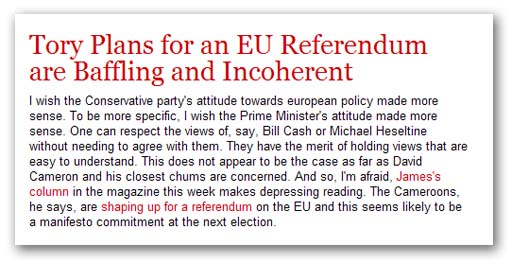 For their next election manifesto, we are told by the Spectator's clever James Forsyth, the Tories are planning a "wheeze" – a commitment to an EU referendum.

Alex Massie, also writing in the Speccie, takes this at face value, because James Forsyth knows all about these things. Nevertheless, he is distinctly underwhelmed, noting that this is a tactical ploy designed to strengthen the party base, forestall grandstanding by Boris Johnson and to protect the Tory right flank from UKIP.

Despite this, the clever James Forsyth tells us that the precise form of a referendum has not been decided, other than it will not be a straight in/out plebicite. Rather, the manifesto might propose renegotiating Britain's membership of the EU and then holding a referendum on the result, or holding a referendum asking for permission to go to Brussels and renegotiate.

In the former case, that would be a repeat of 1975, whence we would find all the established parties, including the Tories, campaigning to accept the new terms, even – one assumes – if they are as meaningless as they were last time.

However, the clever Mr Forsyth believes that this referendum will be a Good Thing. Given public opinion on the matter and the continuing crisis in the eurozone, Britain's relationship with Europe looks certain to have changed by the end of the decade, he says. We will either have the equivalent of a country membership of the Brussels club or we will have left altogether.

Massie, to give him credit, pours cold water on the "country membership" idea, arguing that renegotiation is unlikely to succeed. But it is equally unlikely that Cameron would allow himself to get into the position where he had to support our departure from the EU, he thinks. On that basis, Massie finds the plans for a referendum, "baffling and incoherent". 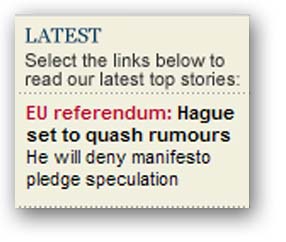 Harry Phibbs in the Wail, however, has no such reservations. He applauds the Spectator "scoop". If voting Conservative at the next election meant having the chance to decide, it would result in the Conservatives taking votes from UKIP but also many votes from Labour and the Lib Dems, he writes.

Rather taken with the idea, he adds that it could be "the deal-breaker with the electorate". It could be the issue that brings about a majority Conservative government rather than a coalition or a return to Labour. What is more important, it could mean the British people at last restored to self-government.

Joining in the fun comes the Economist, which recalls Mandelson and his support for a referendum. It then picks up on the Tory Boy Blog, which offers a detailed analysis of why the clever James Forsyth is "on to something".

But then, the house of cards comes tumbling down. Peeking from behind the Murdochian paywall is a tantalising little snippet (above), letting us know that little Willie Hague is going to deny everything. Why oh why does one listen to the chatter? These plans are not so much "baffling and incoherent", as completely fictional. The clever Mr James Forsyth has been wasting our time.