The elephants in the water 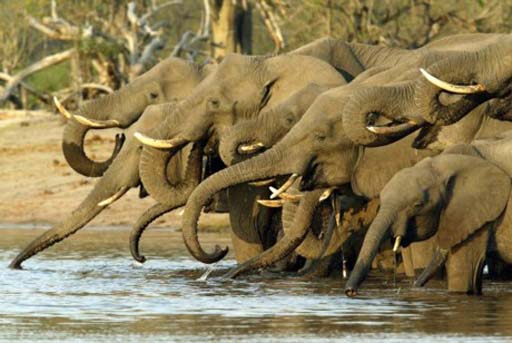 Although this has the smell of the EU, not wanting to leap in without fully understanding the situation, I've been holding off from identifying an EU link in the current application of UK water policy.
However, I have now gathered enough to determine that we are indeed dealing with the EU – and in a big way. The current agenda is coming entirely from the EU, and in particular from Commission Communication COM(2007) 414 final, on: "Addressing the challenge of water scarcity and droughts in the European Union".

This is the worst of all combinations, though. It involves the EU and climate change, with the Commission asserting that water scarcity and droughts have now emerged "as a major challenge" – and "climate change is expected to make matters worse".  Using that as its base, the EU has effectively taken over water management policy.

Interestingly (if that is the right word), we are also seeing a convergence between the attitude to energy and water supply. Having adopted "an Energy and Climate package to guide the EU towards a sustainable, competitive and secure energy policy", the commission tells us that "one of its central themes" is to tackle the energy challenge by "first making an effort to use energy more efficiently before looking at alternatives".

This approach, it then says, "is also valid for water scarcity and droughts". And now it all begins to make sense. We've seen a perversity creep into UK policy where, instead of dealing with local water shortages by increasing storage capacity, government is preventing these shortages from being resolved, and is then seeking to reduce consumption. Now we see where this is coming from.

"In order to come to grips with water scarcity and droughts", says the commission, "the first priority is to move towards a water efficient and water-saving economy". What the commission decided, the UK government has adopted.

Then we see the climate change manta, for the commission goes on to tell us that: "Saving water also means saving energy, as extracting, transporting and treating water comes at a high energy cost". Thus, the commission asserts that: "it is essential to improve water demand management".

Having set the baseline, we very quickly get to the core, with the commission deciding that one of the main challenges to be addressed is "ineffective water pricing policies" which generally do not reflect the level of sensitivity of water resources at local level.

The "user pays" principle, it complains, "is hardly implemented beyond the sectors of drinking water supply and waste water treatment. Introducing this principle at EU level, it then asserts, "would put an end to needless losses or waste, ensuring that water remains available for essential uses across Europe". In other words, says the commission, "it would encourage efficient water use".

From those beginnings, via the Framework Water Directive, we see the emergence of a formal policy, the effects of which are only too evident. This is not a failure of policy, as we have suggested. It is the replacement of UK policy by EU policy.
That it is now in the process of being implemented we see via the Daily Wail and the assertion from the Lords Agriculture, Fisheries and Environment EU sub-committee that water bills "should be allowed to rise" to encourage people to save water in the face of scarcer resources.

Needless to say, the Wail cannot get its head round the idea that the reason why the Lords European Union Committee is thus declaring is that it is parotting EU policy. The protection of our water environment while the population continues to grow will require the adoption of innovations, such as metering, and real-time information about domestic water consumption, and will require consumers either to pay more or to save more, says the Committee. And then are we told:

We believe that the cost of water will have to rise in areas where other measures are not enough to meet the challenges of water scarcity.

Basically, price is to be used as the primary tool of water management. No longer is it the function of water companies to provide adequate supplies of clean water at minimum cost. The task is to reduce demand, thereby saving energy and reducing carbon footprints.

Of course, if water becomes too plentiful and there is no need for rationing, extreme water-saving measures could not be implemented and consumer resistance to price rises would be difficult to overcome.

Therefore, in implementing EU policy, it has become government strategy deliberately to maintain a climate of shortage, and an atmosphere of crisis. The consumer is being given the choice between standpipes and higher prices, which makes paying more seem a better option. But it is an artificial choice, engineered for doctrinal reasons rather than necessity.

Once more, we are being taken for a ride. The [EU] elephants are in our water supply, and the British government, as always, is falling into line.