2012-04-29 00:55:09
For Booker readers looking for FCO 30/1048 (with annotations), it is here (.pdf format - 18 pages). We have our own look at the issues he raises in this piece, with a review of the Booker piece below. And, for an in vivo example of alienation, go to Witterings for Witney.
Meanwhile, the idiot d'Ancona prattles on, asking whether this is "David Cameron's last chance to regain the public's trust?". At least one of his commenters notes the fatuity of the proposition. This is the man whose party failed to gain a majority in the general, demonstrating that he never had the public's trust.

Janet Daley (yes, the whole claque is piling in) suggests that we are back to a Conservative Party – and a country – that is being run as a club. And indeed, we have returned to the idea of party cabals and the "old gang". More of this later. 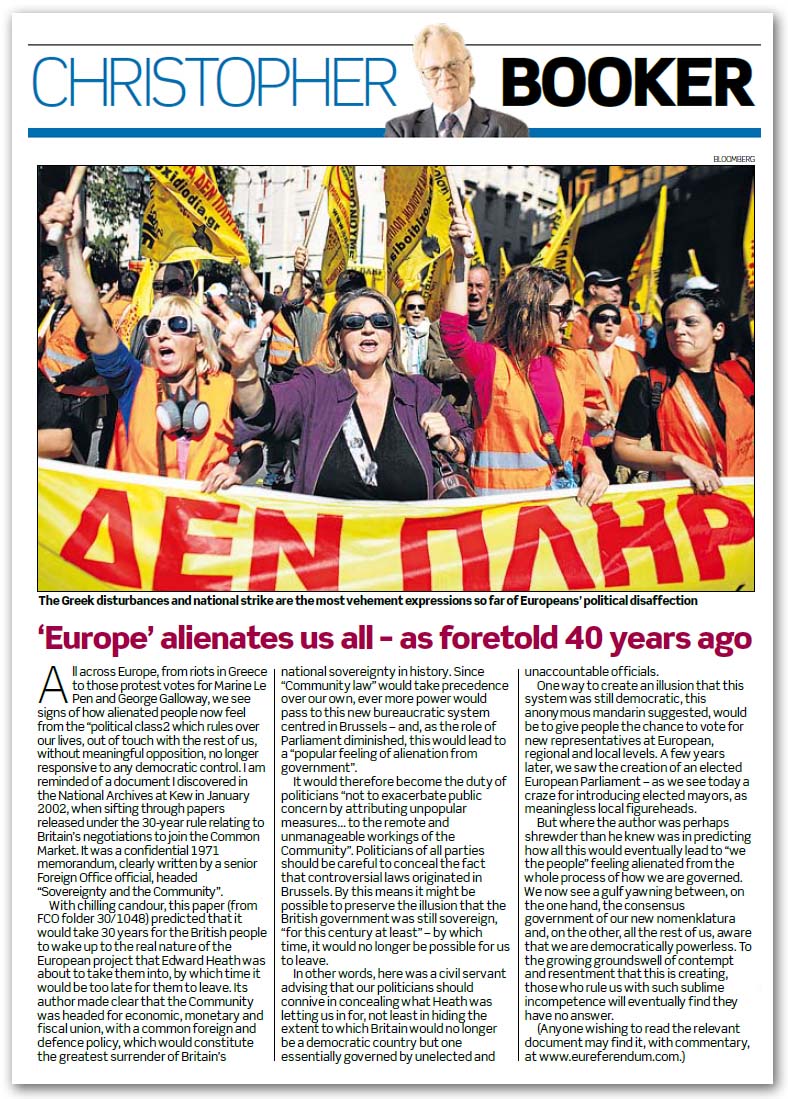 Just about every media political commentator at the moment is addressing the issue of political alienation, or the consequences of it, but very few – as does Booker in today's column - put the EU centre stage.
When you think about it though, to discuss current sentiment solely in terms if Cameron and the failures of his government, is parochial to an extreme, the ultimate in "Little England" politics. And Booker points out, political alienation is not a uniquely British phenomenon. It is Europe-wide (and spreading beyond).

In Europe though, from the riots in Greece to those protest votes for Marine Le Pen, the then George Galloway, we see signs of how alienated people now feel from the "political class" which rules over our lives. Alongside the Greeks, the French, and even the Germans, we see our masters as out of touch with the rest of us, without meaningful opposition, no longer responsive to any democratic control.

And thus does Booker look for one of the common factors, which is of course the European Union. And, for an explanation of why the political process should be so afflicted, he too goes to FCO 30/1048.

This document, he tells us, predicted with chilling candour, that it would take 30 years for the British people to wake up to the real nature of the European project that Edward Heath was about to take them into, by which time it would be too late for them to leave.

Its author(s), writing in 1971, made clear that the Community was headed for economic, monetary and fiscal union, with a common foreign and defence policy, which would constitute the greatest surrender of Britain’s national sovereignty in history.

Since "Community law" would take precedence over our own, ever more power would pass to this new bureaucratic system centred in Brussels – and, as the role of Parliament diminished, this would lead to a "popular feeling of alienation from government".

It would therefore become the duty of politicians "not to exacerbate public concern by attributing unpopular measures … to the remote and unmanageable workings of the Community". And hence thrives the European elephant in the room.

Politicians of all parties were also warned to be careful to conceal the fact that controversial laws originated in Brussels. By this means it might be possible to preserve the illusion that the British government was still sovereign, "for this century at least" – by which time it would no longer be possible for us to leave.

In other words, says Booker, here was a civil servant advising that our politicians should connive in concealing what Heath was letting us in for, not least in hiding the extent to which Britain would no longer be a democratic country but one essentially governed by unelected and unaccountable officials.

One way to create an illusion that this system was still democratic, this anonymous mandarin suggested, would be to give people the chance to vote for new representatives at European, regional and local levels. A few years later, we saw the creation of an elected European Parliament – as we see today a craze for introducing elected mayors, as meaningless local figureheads.
Entirely deliberately, though, I choose to call them elected mares. If Caligula had a horse for his consul, we now have mares.

Returning to the anonymous FCO author(s), where they were perhaps shrewder than they knew (the paper has the feel of multi-authorship) was in predicting how all this would eventually lead to "we the people" feeling alienated from the whole process of how we are governed.

We now see a gulf yawning between, on the one hand, the consensus government of our new nomenklatura and, on the other, all the rest of us, aware that we are democratically powerless. To the growing groundswell of contempt and resentment that this is creating, those who rule us with such sublime incompetence will eventually find they have no answer.

Thus, as I wrote in my piece, this feeling of alienation is neither perverse nor untoward. It was predictable, predicted – and it has come to pass. Oddly though, there are still those are those who regard opposition to the EU as a "single issue". If you want to claim that "politics" as a whole is a single issue, then I suppose that is the case.

But, as the man once didn't say, some issue – some neck.