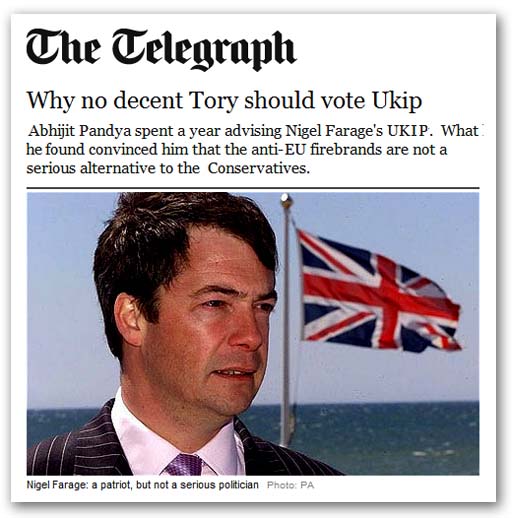 Now that Iain Martin has "discovered" UKIP and marked the party down as a potential threat to his beloved Cameroons, the alarm bells must have been sounding in Failygraph towers.

With remarkable speed, they have dredged up another former UKIP "head of research", who is evidently thoroughly disenchanted with Master Farage and  who is prepared to dish the dirt on the man and his party.

Farage does rather seem to have a problem with his research heads, and this one – a certain Abhijit Pandya – is sharing his wisdom with us as to "Why no decent Tory should vote Ukip". Having spent a year advising Nigel Farage's UKIP, he says, what he found convinced him that the "anti-EU firebrands are not a serious alternative to the Conservatives".

To be fair, one should say that Cameron's Tories are not a serious alternative to the Conservatives either, and in the absence of anything that approximates a Conservative Party, many people think that UKIP is about as near as they will get, for the time being.

Mr Pandya clearly feels differently. UKIP MEPs, he claims, are obsessed with infantile stunts. These include wondering (sic) around Brussels, at the taxpayer's expense, singing "there is a hole in my bucket". Entertaining as it is watching Mr Farage doing this, and giving bombastic speeches in the European Parliament, adds Pandya, it does nothing to curb the powers of the EU.

However, while one might share some of Mr Pandya's reservations about Farage, one should also note that "Panders", as he was known, is a rather odd cove himself.

Having, in the 2010 contest for a leader of UKIP, emerged as a prominent supporter of Farage, he was rewarded, or so we are told, by being made Head of Research. He later praised Farage as "the Churchill of our times", a piece he has now quietly erased from his own blog and the Failygraph has deleted from its comments when I posted it there.  This is what he actually wrote:

His orations in the European Parliament are extraordinary, not just for their energy and vitality, but because he is like David facing Goliath in a cesspit of snakes where everyone is against him. People forget that UKIP is the only political party in that Parliament that is opposed to their nation's continuing membership, and hated with a vulgar passion by the other political factions therein.

He wields his unalloyed silver tongue on the simple truth that democracy and self-government matter. Who knows with Farage continuing at its helm, where it will be in 2019, a decade after UKIP established itself as the serious political alternative in Britain?

Despite overwhelming odds it is exciting to watch to where the mercurial gifts of their leader will take UKIP. The only path and destiny open to him is upwards, or else Britons will be left scrapping over the process of fragmentation of the UK whilst the real ruler becomes Brussels, like a silent nocturnal baby-snatcher fabled in medieaval  (sic) popular myths.

Whilst Churchill was born to fight the Nazis (he wrote this in a letter as a school-boy) providence has created a parallel in Farage to fight today's EU cormorant seeking to devour our independent democracy.

Now, after being forced out of his post as head of research, he is now, through the good offices of the Failygraph accusing his former party of being more interested in "ranting and raving" and of "screaming demagoguery" – all of which is probably true.

What is also probably true is that, as head of research for an anti-EU party, "Panders" is not very good at his job. There we have him on his Wail blog in March of this year, offering reasons as to "why the European Parliament should be abolished".

And, bang in the middle of the piece, we have "Panders" telling us that "it makes a return to the free trade customs union impracticable, by ensuring that the EU's law-making is done at extraordinary speed, and without veto". This, in turn, we are told, "makes it difficult for nation-states to know which regulations to repeal if they were to leave the EU. This undermines the democratic opportunity at the national level to argue for a free-trade system and a common-custom union (the position prior to the creation of the single-market)".

Not least, there is here the obvious failure to understand what a "customs union" is, and his creation of a bizarrely mythical creature "the free trade customs union". If this tosh measures his grasp of the EU (and there is plenty more), UKIP is better off without Mr Pandya. The fact that he has been head of research may in part explain UKIP's lacklustre performance.

That the Failygraph now gives this tawdry man a platform from which to attack the party, however, is highly revealing. More usually, the newspaper treats Farage as lightweight political fluff, or ignores him and UKIP altogether. That it should be launching into the attack suggests that they are seriously worried.

Add that to Timmy's extravaganza behind the paywall and the comments in The Tory Boy Blog, and a pungent aroma assails the nostrils. It is the smell of fear.