Spy in the (Euro) sky 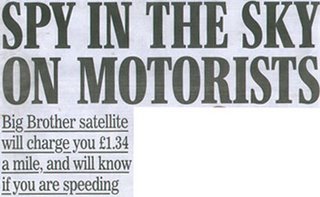 Bursting onto the front page of the Daily Express today is the banner headline (illustrated), "Spy in the sky on motorists" – the paper's "take" on the announcement by the newly appointed transport secretary, Douglas Alexander, that he intends to make satellite-based road pricing his "personal priority".

The government's "big idea" for reducing road congestion is to impose a system of variable charging which could force motorists to pay up to Ł1.34 per mile at peak times, with lower charges – down to 2p per mile – on less frequented roads.

Predictably – and understandably – the paper picks up on the "big brother" aspect of the system, noting that the technology could be used to "snoop on the private lives of citizens" – a highly justified fear as the system itself relies on being able to record, very accurately, every journey you make in a car.

And, as the Express's strap warns, the same technology could be used for monitoring vehicle speeds, with the spectre of a speeding ticket winging its way to your door every time you go over the posted limit. Further down the line – although not noted by the paper – is the possibility of installing "intelligent" speed limiters, which actually prevent a driver exceeding the posted limits in any area. 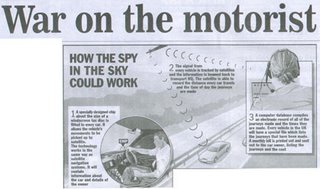 Hillariously, the report author, "transport editor" John Ingham, seems not to have the faintest idea of how the system works, hence a lurid graphic (illustrated) which portrays an anonymous satellite actively tracking a vehicle, "beaming back" the information to a "transport HQ".

For the record, this is not at all how the system works. In fact, it utilises the GPS satellite navigation system and – of very great interest, to which we will refer shortly – this will almost certainly be the EU's Galileo system. This system, in common with the US "Navstar" GPS system, is entirely passive, each satellite in the constellation simply transmitting a time signal. With three or more such signals, a vehicle-mounted receiver can translate these data into positional information and tell drivers where they are. 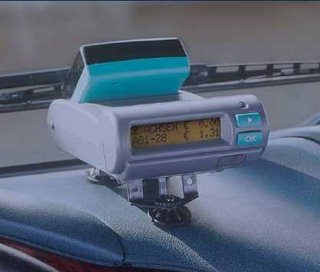 For a road pricing system, this information is processed by what is called an "on board unit" (OBU) which holds personal and vehicle details in its microchip memory. It continually processes satellite signals to work out positioning, integrates those data with the personal details and then transmits that information via an in-built GMS mobile phone to a receiving station. There, the trip details are recorded and charges are calculated. Generally, the user then receives a monthly invoice, or cash can be withdrawn directly from users' bank accounts.

To prevent "free riders", there is also a separate, but linked enforcement system. This involves, typically, road gantries with highly sophisticated cameras linked to number plate recognition software. The German system is also able to take 3-D infra-red images, which can identify the type of vehicle going through. 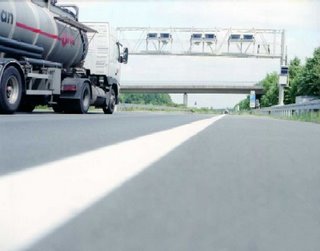 Every vehicle going under a gantry (or past a free-mounted and sometimes vehicle-borne camera) is recorded and the details are checked with the charging database. It the vehicle is not registered, details are automatically beamed to mobile enforcement units which intercept the vehicle and take the necessary action.

Such a system has been applied very successfully in Germany, through a private company set up to run the scheme, called Toll Collect. Detailed information on the scheme can be found here (64 pages, PDF).

Crucially, though, what makes the system politically acceptable – and feasible – is that it only applies to trucks, and then only to the motorway system. This ensures that the high proportion of foreign trucks transiting the system bear their share of the running costs, the surplus income being used wholly for road maintenance.

Furthermore, the sensitive "big brother" issue does not apply, as there is no problem about truck journeys being recorded. Also, charges are set at a relatively modest level, between 9-13 cents per Km for a three-axle truck, depending on emission levels. That emission "discount" has been highly welcomed as it creates an incentive to operate "green" trucks. Additionally, there is a surcharge for empty trucks, which has seen the number of empty runs reduce by 17 percent, keeping trucks off the road.

However, what Alexander is proposing is in a wholly different league. Given the huge number of private vehicles on British roads – approximately 25 million, as against less than 500,000 goods vehicles – and the extent of the road network, he is setting out to try something, the scale of which has never been attempted before – all in the context where over 30 percent of the DVLA database contains errors.

The government track-record on major computer systems is lamentable and the sheer practicalities of getting the scheme up and running are daunting. Most likely, this would be another spectacular failure. 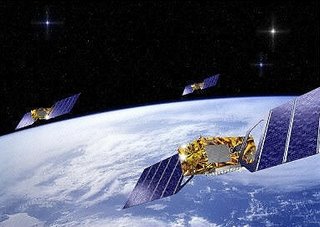 Nevertheless, in order to get public agreement, Alexander might attempt to sugar the pill by promising to lower petrol tax. But, according to the Express, fewer than one percent of drivers actually believe the government would do this. The charges would be yet another tax on motorists. Combine that with the "civil liberties" issue of all journey data being recorded and public hostility is almost guaranteed.

But there is also a strong EU dimension. Although the German system currently uses the US GPS signal, the EU commission is determined that any European system should be based exclusively on Galileo (illustrated above), for which use it will be charging national operators. Therein lies the prospect of a lucrative "Euro-tax", with motorists contributing to the EU coffers every time they take to the roads.

Needless to say, the former Europe minister is silent on this aspect and it is not mentioned by the Express. But Alexander is determined to move the debate from "why" to "how". He will have a battle on his hands, not least from the Eurosceptic community.