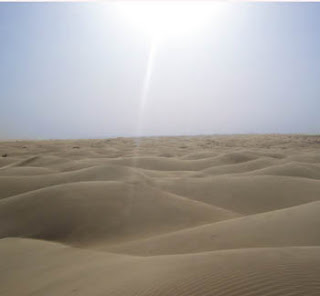 Contrary to popular belief, we do not go out of our way to pick holes in the output of sundry journos. However, increasingly often, it seems, their claims are so outrageous – or their writing so gullible – that we simply cannot leave them without comment.

Storming straight into both categories goes the latest offering from Laura Clout of The Daily Telegraph who today tells us that, "A series of huge solar farms in the Sahara could supply the whole of Europe with clean electricity".

This is according to "EU scientists" with a madcap scheme so bizarre that we had to check the date so see whether the story had been left over from 1 April.

That aside, it is the detail that matters. Here we have the egregious Laura gravely informing us that the scheme proposed would require an estimated investment of around €450bn (Ł356bn), to "produce 100 GW by 2050, more than the combined electricity output from all sources in Britain."

For the record, peak consumption in Britain last winter was 60 GW but, only last month we were conveying an estimate from Paul Golby, chief executive of E.ON UK, that the UK alone needs more than 120 GW capacity by 2020.

This tells you that we have another inhabitant of the land of the fairies. With Clout twittering away about 100 GW supplying the "whole of Europe" by 2050, we see that just the UK would need 20 percent more than that – thirty years earlier.

The fatuity of her piece really comes home, however, when you realise that, currently, European nations operate 197 nuclear power plant units with a capacity of 170 GW, and that accounts for one fifth of total capacity. By that reckoning, Europe works on about 850 GW, yet this lady is happy to run a story suggesting that the whole of Europe can be satisfied with 100 GW. In fact, by 2050, Europe will probably need in the order of 1000 GW, if not more.

Even then, our Laura has not finished. Through her story, she conveys the idea that this wonderful source of electricity could actually work out cheaper than we are currently paying – a highly dubious proposition. Clearly, she has not done any maths on the capital cost. At Ł356bn for the scheme, this works out at roughly twice the cost required to build nuclear power plants to produce the same amount of electricity.

What is more, there is one other minor problem with this scheme, which Clout does not seem to mention. Solar power, strangely enough, depends on the sun. That is fine as far as it goes, but – unless you know different – the sun does not shine during the night. During the hours of darkness – which is when we get peak demand – there would have to be 100 percent back-up from conventional generation.

Only yesterday, we were writing about green illiteracy and here again we have another classic example - from the same journalist who, recently told us that the cold wet summer was attributable to global warming.

And yes, it does matter. Even now, broadsheets like The Telegraph carry a certain amount of authority. This sort of garbage, therefore, will be believed by some, supporting the general ignorance of the extent of the failure of our energy policy. We really do deserve better from our serious newspapers.