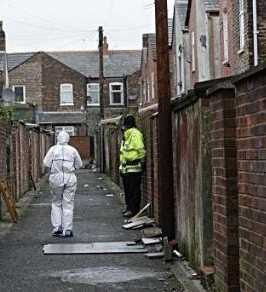 "Jaw-dropping" does not even begin to describe the news we read in The Times and elsewhere.

This tells us that a suspect in the alleged Manchester terror plot had been allowed to enter Britain last week, despite irregularities in his immigration papers. One "police source" has told the paper that the decision to admit the suspect at the airport last week had been "a shambles".

The man's documents had been all "over the place" when he had landed but had been allowed to proceed on the basis that he would return for an appointment with immigration and show them correct documents. Said the source, "He was never going to do that. He was effectively left free to do whatever he wanted."

You have to read a little further to find that "security sources" are suggesting that the suspect might have been allowed "to run" in the expectation that he would lead the authorities to other conspirators. That could be true, although it would have been a high-risk strategy, with the possibility that target simply disappeared into the undergrowth.

Maybe the truth – or some version of it – will emerge in due course, although it would be unwise to restrict one's oxygen intake in anticipation of emerging any the wiser.

However, given the lurid headlines in The Daily Mail and other dailies, the impression of our immigration controls being in total disarray is once again reinforced, an issue which has significant political traction.

This is yet another area of public policy where the government displayed its usual level of incompetence but it is also one where opposition parties have been less than diligent in pursuing remedies.

To give him his due, it was raised by Conservative MP Douglas Carswell in June 2006 but it has hardly been high profile since. The last time Tory MPs collectively tackled the subject seems to have been in January 2008, well over a year ago.

With such a lacklustre record, it is a little difficult for the Tories now to take "ownership" of the issue which means that, with it now topping the news agenda, they are left flat-footed once again, leaving the field wide open for the likes of the political BNP to stake a claim.

Predictably, that is precisely what the BNP is doing, with a highly focused "news" story placed on their web site since early afternoon yesterday.

By contrast, the Conservative website has for its top story – dateline Thursday 9 April - Eric Pickles sending his "best wishes to Christians, Sikhs and Jews celebrating the festivals of Vaisakhi, Pesach and Easter this April." 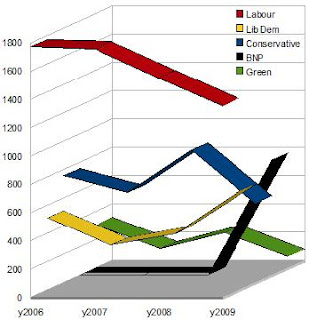 It is hardly any surprise, therefore, that the BNP is taking the high ground and even less surprising that this should be showing up in local elections results. Looking closely at the Manchester (Moston) result has been the political correspondent for the Manchester Evening News. This is David Ottewell, and his findings are quite remarkable (see graphic, right).

In what was a closely fought seat between Labour and the Tories, we saw a near 11 percent drop in the Labour vote, but a catastrophic drop of 14 percent for the Tories. That Ottewell found interesting, remarking on the "the collapse in the Tory vote - in a ward they have previously targeted vigorously, and at a time when they are riding high in the national polls."

Some of that vote might have been picked up by the Lib-Dems, who gained seven percent, but with the BNP getting 23 percent and coming second – in its first appearance in the ward – the Tories plummeted to fourth place, with the Lib-Dems third.

Nor is this an isolated result. Something similar happened in March, in Carlisle, where the Tories also lost more votes than Labour, suggesting that there is – at the very least – a "BNP effect" which is muddying the waters.

Latterly, after Harman's intervention, it seems that Conservative Home is acknowledging that the threat exists, but there is clearly some considerable complacency.

Thus, although Harman is now saying that the BNP could pose a threat to Labour in the euro-elections, it could also cause problems for the Tories. The Manchester result, on the back of Carlisle, should be taken as a warning. Ignoring this phenomenon will not make it go away and nor can it be assumed that any BNP success in the euros will not run into the general election.

Nearly two years ago, Tory MP Charles Walker wrote a monograph on dealing with the BNP. His advice included the injunction that, "We must rediscover our campaigning zeal and let it be known that we value our constituents and their vote."

His party would do well to take that advice. It might also take note of Martin Luther King's homily (cited yesterday by LGF), that, "Our lives begin to end the day we become silent about things that matter." That applies to political parties as much as it does to individuals.