A failure of reorganisation 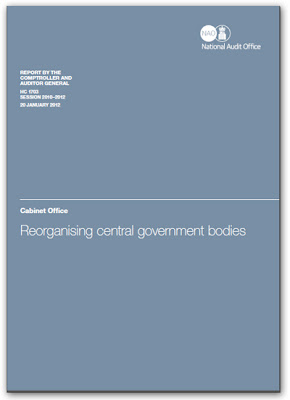 People have short memories, forgetting that the "great leap forward" in the development of quangos came under Thatcher with the launch of "Next Step Agencies", and Major with his Regional Development Agencies.

The idea was to increase visibility and accountability of obscure government bodies, which could hide their spending within the accounts of their controlling departments, while the heads could hide behind the skirts of ministerial responsibility.

These new bodies were to become more like private sector firms, with their own boards of directors and chief executives, separate accounts and their own objectives and targets.

As it turned out, though, the only way the private sector was seriously emulated was in the rampant inflation in salaries for CEOs and the "quango queens" who joined the boards, while "accountability" became a farce, as ministers found they had no real control and the bodies were largely autonomous.

So the worm turned and this current administration has decided to claw back the powers of these bodies, which the media insist on calling "quangos", having launched the Public Bodies Reform Programme, run by the Cabinet Office, under the egregious Mr Letwin.

But, according to the National Audit Office, they can't even get this right. In a report issued today, the NAO accused the Cabinet Office of grossly under-estimating the transitional costs of reorganisation, rejecting the estimate of Ł425 million and suggesting that costs will be at least Ł830 million.

Furthermore, says the NAO, there is an "insufficient grasp of the ongoing costs of functions transferred to other parts of government", meaning that the government departments have failed to understand that if they absorb quango functions into their own departments, rather than abolish them altogether, they are still going to cost.

Overall, this makes a nonsense of the administration's claims on cost-savings. Originally claimed to be Ł2.6 billion, the civil service is going to have to find Ł3.5 billion if they are to meet the net savings target, after the higher costs of transition have been taken into account.

And, says the NAO, despite greater accountability being the programme's primary intended benefit, only one of the six departments examined had proposals for a well-defined, though basic, measure of success for it. In other words, the savings will not actually be anything like those claimed, and any improvements in accountability are likely to illusory.

There is a profound lesson to learn here. Mere reorganisation of government functions is unlikely ever to bring much in the way of improvements, either in costs or accountability, unless accompanied by a fundamental reappraisal of functions (with a strong emphasis on abolition).

There is a similar lesson in relation to our withdrawal from the EU. Just leaving the evil empire is unlikely to achieve anything, per se – and especially not in terms of cost savings - until or unless we rethink the way government is supposed to work and what it is supposed to do.

As for the "bonfire of quangos", it looks as if the great spectacle is, after all, going to be a damp squib. But then, I don't suppose anybody really expected otherwise.