The facts of (political) life 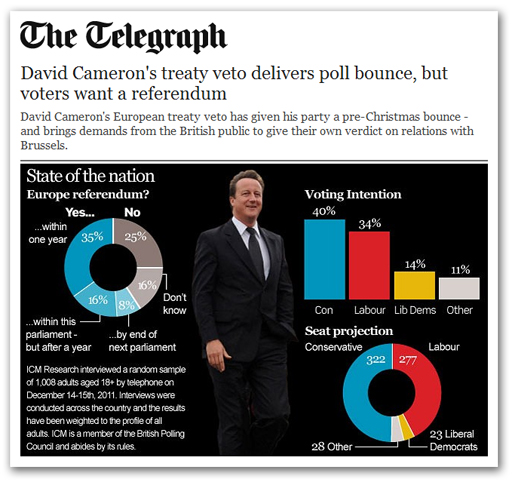 Yet again, we see evidence of public approval for an event that did not happen - Cameron's "veto" – being translated into a lead in the opinion polls. We also see what is in fact a relatively small majority calling for a referendum on whether we should leave the European Union.

Now addressing the political realities, one cannot avoid the view that, if public opinion is so easily and cynically manipulated on the "veto" issue, then it would be relatively easy to manipulate an in-out referendum, producing a politically "acceptable" result.

At the very least, one would expect Cameron to muddy the waters, offering the meaningless option of "renegotiation". And recent evidence indicates that there are more than sufficient people out there who would believe what they are told and go for this moonshine, blunting the force of a straight in-out poll.

It is very comforting nevertheless, to opt for fantasy politics in preference to the real thing. By all means, one can live in hope of Cameron giving us a nice straight referendum which delivers a clear majority for leaving the EU, followed by the repeal of the European Communities Act, and a quick exit.

But it ain't going to happen.

And even if you had a government wholly committed to leaving the EU, it would take some considerable time and effort to work out the precise mechanics of how we would do it.

Let us here, just for a short period, reside in the real world. Say we left the EU, suddenly, unilaterally, on the basis of the repeal of the ECA. What would happen to our trade with the EU member states?

Well, the cheerleaders for the "outers" assure us that trade would be unaffected. After all, the continental states have a surplus on their balance of trade, and would not wish to see this change. And if they took measures against our exports, we could appeal to the WTO or take retaliatory measures.

That is all very good – but let's have a look at that real world, a world in which Britain is not a member of the EU, and has not yet negotiated a trade deal.

Further, on leaving the EU – we assume – Britain is no longer bound by EU single market rules through the EEA and, of special importance, we no longer accept the jurisdiction of the EU commission or the ECJ, in enforcing the rules. Thus, even if we adopt the rules temporarily, there is no mutually agreed mechanism for ensuring enforcement.

In that real world, the Customs Union that is the European Union permits the free movement of goods within its borders. But at the periphery, it has inspection points at designated ports, where goods are examined and checked before they are allowed entry into the EU area – the so-called Single Market area. No goods are allowed entry without checking and inspection.

And, at the stroke of a pen, we are outside that Single Market area. Thus, perfectly legitimately – and entirely within WTO rules, the EU can insist that all exports from the UK are routed via designated ports, for the checking and inspection that is applied to all goods from without the EU and EEA, applicable to those nations where special rules have not been negotiated.

Here, we have a very slight problem. There are no designated ports. Furthermore, you cannot magic them out of thin air. Checking and inspection requires space, a corps of inspectors and officials, offices, computer systems and the whole paraphernalia of border inspection regimes.

There are no such facilities at Calais, nor at any of the other Channel ports in France … nor Belgium or Holland. And there are none on the German seaboard. And nor are any airports on mainland Europe equipped to deal with the inspection of goods that would arrive from the UK.  Furthermore, it would take years to build facilities capable of handling the volume – at the cost of billions.

Thus, perfectly legitimately, from the day we leave the EU unilaterally, British exports to the EU would stop. They would stop immediately and remain stopped until we had negotiated alternative arrangements for their entry to the EU. And, given a complete absence of good will, how long do you think that would take?

Of course, we can retaliate. But the EU would have been acting perfectly legitimately, within WTO rules. We would be breaking the rules. Legitimately, the EU could then retaliate against us, and we are immediately in a trade war – just what we need.

And, when (or if) it comes to a referendum campaign, do you really think that the Europhiles are not going to point out problems such as these? Do you really think that, after months of such propaganda – backed by a Europhile Cameron and the bulk of British industry – the British people are going to rush to the polls to commit what they have been told is economic suicide?

Yet we do not need a referendum. A British government committed to leaving the EU can do so without one. But what we do need – will always need - is a detailed evaluation of the mechanics of leaving, providing us with a realistic exit plan, a timescale and a reassurance that the disruption and damage (and there will be some of both) can be minimised.

But, if we do have a referendum, in order to win, we should still need such an exit plan, otherwise the Europhiles stand a good chance of carrying the day – as they did in 1975.

Thus, the priority is not a referendum, especially when, in the real world, it would be a very brave (or stupid) man who guaranteed a win. The priority has to be an exit plan, and one based on expert knowledge – not the superficial and misleading efforts we have so far seen.

These are the facts of (political) life. But one senses that the British people are not too fond of confronting reality, preferring fantasy politics to the real thing – which is perhaps why we continue to oscillate between Labour and the Conservatives, and are currently lumbered with the coalition.

Nevertheless, that does not stop the grown-ups from dealing with the issues. Going along with the fantasy, it seems to me, is not a winning strategy.