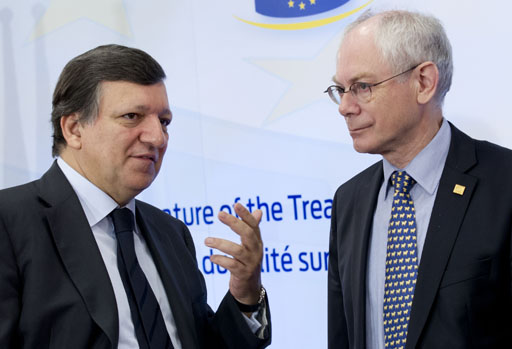 Well, the treaty that was so skilfully "vetoed" by The Boy in December has now been signed by twenty-five leaders of EU member states in Brussels today.

This is what the "colleagues" are calling the Treaty on Stability, Coordination and Governance. It is aimed at strengthening fiscal discipline and introducing stricter surveillance within the euro area, in particular by establishing a "balanced budget rule". Cameron must be so pleased he was able to stop it in his tracks.

Such an event would not be complete without a little homily from van Rompuy, who told the chaps that the treaty constituted "an important step in re-establishing the confidence in our Economic and Monetary Union".

No doubts are allowed to cross the path of the revered council president, who then gravely informed the world that "the restoration of confidence in the future of the Eurozone will lead to economic growth and jobs". That, he said, was the "ultimate objective".

The signing was on the first day of the spring European Council, which traditionally deals with economic matters, although the massed ranks of the media still insist on calling the meeting a "summit", demonstrating yet again that none of their commentary can be taken seriously.

The meeting also marks the re-appointment of van Rompuy as president of the European Council for a second "mandate" of two and a half years. The "Euro Summit" has also designated him president, for the same period.

Said Rompuy, on accepting the extension of his Ł249,000 a year post: "... The word 'Europe' has long been a sign of hope, embodying peace and prosperity. In the wake of the crisis this equation has come under stress. It is my, and our, role to make sure that Europe again becomes a symbol of hope. Of a better future for all".

Meanwhile, The Boy seems to be bitching that the "colleagues" are "ignoring his proposals to tackle its debt crisis by cutting red tape to free markets and unleash economic growth". But he should hardly be surprised. Since the acquis communautaire is at the very heart of The Project, proposals to cut it back are about as welcome as plans for building a new Israeli embassy in Mecca.

On the broader front, there are nine days left for the completion of the Greek debt swap, leaving Jeremy Warner struggling to catch up with recent events. But again, we see a reference to a European Marshall Plan, which provides yet another clue to the longer-term intentions of the "colleagues".

Whether Warner likes it or not, the current strategy is to flood the PIIS (PIIGS minus Greece) with money, and to isolate the Greek economy, prior to cutting the country adrift in the autumn, when the spin will be focused on the new rescue plan which will restore Greece to economic prosperity.

Gradually, the pieces are falling into place and, if the euro can survive past the summer, my gut feeling is that they might just get away with it for the time being. And, for the "colleagues", that is all that really matters. Tomorrow is always another day.